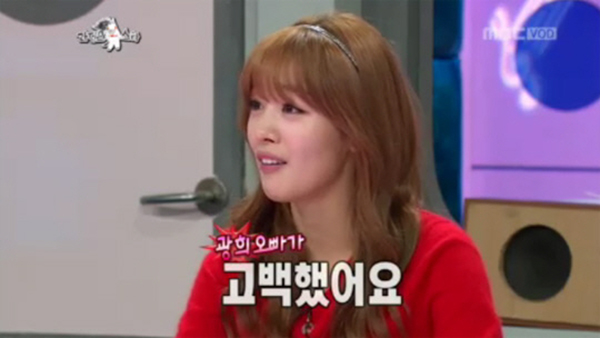 
While on MBC’s “Radio Star” on Nov. 7, Secret member Han Seon-hwa said she had an inkling that her spouse on the mock-reality show “We Got Married,” Kwanghee from ZE:A had feelings for her.

“I think he likes me for real, he keeps contacting me,” said Han who said Kwanghee messaged to ask what she’d like for her birthday.
“I told her nothing to send a clear message. But then the next day he brought me a matching couple phone.”
Han said she refused to take the present and asked him up front why he was behaving that way.

“He said ‘because I like you’ and then asked me if I still saw him as just a friend,” revealed Han.
Kwanghee also promised to the amusement of audience members that he wouldn’t rush or pressure her.
By Carla Sunwoo [carlasunwoo@joongang.co.kr]