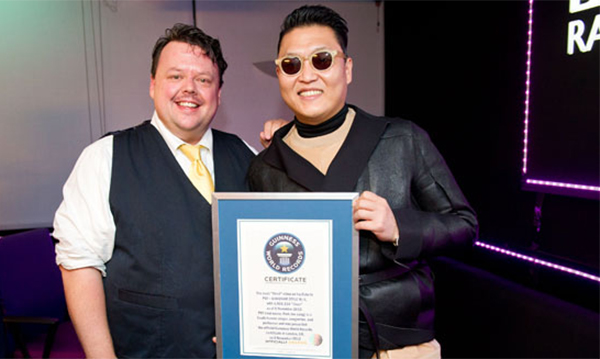 Rapper Psy was awarded his very first certificate of achievement.

On Thursday, the Korean entertainer, who is in Europe for promotions, was presented with the Guinness World Records certificate for the most “likes” on YouTube.

The certification was awarded by Editor-in-Chief Craig Glenday for his smash-hit “Gangnam Style” exceeding 2,141,758 likes on Sept. 21.

“‘Gangnam Style’ is an infectious, joyous song that has brought a smile to the faces of a tenth of the world’s population, and the result is that it’s the most-liked video of any kind in the history of YouTube,” he said.

Psy uploaded a picture of himself, Glenday and the certificate on Twitter, claiming, “What an honor. It’s the first certificate I’ve ever received.”