For antique fans, Dapsimni is a real find

For antique fans, Dapsimni is a real find 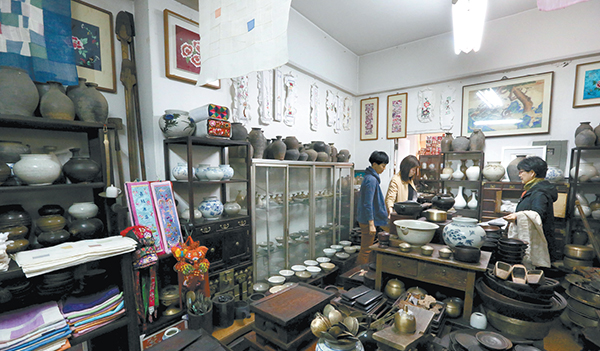 Japanese tourists browse through shops at Dapsimni Antique Shopping Complex. They say they can get a taste of Korea’s traditions here in a quiet, unpretentious atmosphere. [JoongAng Ilbo]


The air was heavy with the smell of old paper, old wood, old fabric - in fact, old everything. Dapsimni Antique Shopping Complex had chests, ceramics, traditional doors with all sorts of patterns, bird cages, wheels off a carriage and almost anything else one could imagine. Some of the items seemed to have traits of Chinese and Japanese culture. But who knows for certain? 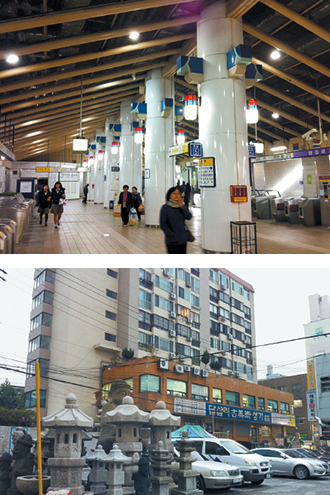 Dapsimni Station (top) is decorated with traditional Korea elements like seokkarae, the wooden poles used in traditional architecture, in the ceiling as well as cheongsachorong, blue and red traditional lamps. Stone monuments sitting outside (above) are the closest thing to a sign. By Kim Hyung-eun

The area near the Dapsimni Station, subway line No. 5, in eastern Seoul, has been well known among local antique lovers since the 1980s for its long lines of antique shops.

Before then, antique shops in Korea were scattered, with many in Hwanghak-dong in Jung District and Ahyeon-dong in Seodaemun District, central Seoul. But with soaring property prices and worsening traffic congestion in those areas, most shops have ended up in this quiet, rather underdeveloped part of Seoul. Today, Dapsimni is home to a cluster of about 150 antique shops.

Dapsimni is neither as historic nor storied as, for instance, Insa-dong, where there are also many antique shops and art galleries because that’s where court painters used to shop for supplies during the Joseon period (1392-1910).

Also, Dapsimni is not particularly tourist friendly or easy to navigate. There are few English signs and directions or flocks of tourists to follow, a tried and true technique for visitors in unfamiliar territory.

During a recent afternoon visit to the area, a group of stone lanterns, monuments and animals a few meters away from the subway exit was the only visible sign that this was the go-to place for buying vintage art and furniture.

Of course, the upside is that Dapsimni is not as “polluted” with fancy makeup stores, foreign coffee franchises or game rooms. It is easier for visitors to concentrate on the charms of old art and furniture. Some people liken the area to an outdoor living museum.

With growing attempts to bring Dapsimni into the limelight, the Korea JoongAng Daily explored the 30-year-old antique market. 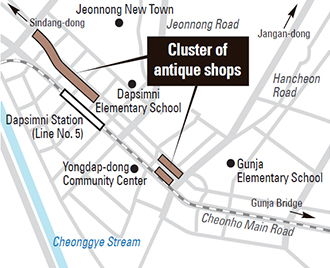 “I feel like I am experiencing Korean traditions here,” says Hana Yokomizo, 32-year-old Japanese tourist. She is one of a growing number of foreigners who are finding what they like at Dapsimni. “I was disappointed when I went to Insa-dong. There were so many cosmetics shops and eateries. It felt like the only thing that was missing there was Korea.”

As she looked around the craft shops at the Dapsimni Antique Shopping Complex, she couldn’t keep her eyes off a small box decorated with mother-of-pearl that had a rather delicate shine.

“With the recession, we are seeing fewer Korean antique lovers coming here,” says Lee Jong-jae, a 61-year-old merchant at the shopping complex. “But that is somewhat offset by an increased number of foreign tourists, particularly the Japanese. I wonder how they heard about this place.”

In March, the Seoul Metropolitan Government announced it has earmarked 300 million won ($275,033) to develop the area as a cultural attraction. Part of the plan is to add design elements to the desolate concrete environment, install signage and directions, and introduce tour programs.

“We hope to work with the people of this area on the project,” says a city government official. “The idea is that we will provide the financial support. Let the people transform the area the way they want.”

Dongdaemun District Office is taking part in the initiative, with plans to redo old signs and create a rest area for tourists. But first and foremost, the office wants to build an informational Web site where people can find out about Dapsimni at a glance.

Also, the Seoul Tourism Organization, which has organized tours and developed new destinations in the city since 2008, will include Dapsimni on its walking tours starting next month. 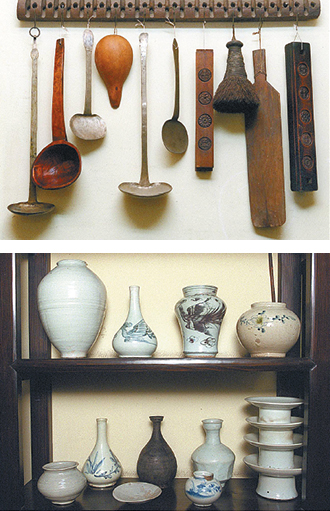 Shops sell everything from low-end kitchen utensils (top) to high-end ceramics (above). A wide spectrum of prices is one of the charms of the Dapsimni market. [JoongAng Ilbo]

There are about 250,000 items for sale at the Dapsimni Antique Shopping Complex with a wide range of sizes, styles and prices.

Some craftwork, such as lamps and embroidery, can be bought for 5,000 won to 10,000 won, while ceramics and paintings can be as valuable as state-designated cultural properties, costing tens of millions of won.

Those with a discerning eye will find plenty of reasonably priced items to spruce up their homes.

Yu Yeong-beom, chairman of the Korean Antiques Association, says many of the shops here have more to offer than pieces made by craftsmen who have their own workshops. “Artists often tend to demand high prices befitting their ‘names,’ but items at Dapsimni are relatively cheaper,” Yoo says. “Also, they were pre-owned and pre-loved by our ancestors.”

On request, merchants at Dapsimni will issue appraisal statements from the Korean Antiques Association.

Perhaps the best part about browsing around the Dapsimni Antique Shopping Complex is that you can touch all you want without having to buy. That is why some parents bring along their children for educational purposes, or just for fun.

“If I take my daughter to a museum, she can only look at items trapped in a glass box. But here she can see, touch and experience,” says Yang Hye-eun, a 36-year-old who came with her elementary school-age daughter. “It’s quite educational.”

Merchants at the Dapsimni Antique Shopping Complex are working together raise the area’s profile.

In September, they launched the Dapsimni Antique Association, which has organized a special special exhibition at Dukwon Gallery in Insa-dong, Jongno District, central Seoul.

Veteran Dapsimni merchants chose 700 pieces of ceramics, furniture, accessories, jewelry, paintings and other items, which all are for sale.

The exhibition is titled “Encounter With Antiques” and runs through Tuesday. “We hope our exhibition will help Korean society ponder about what is authentic Korean and also get inspired about cultural and artistic endeavors,” the association said in a press release.

Yu Deok-yeol, the head of Dongdaemun District Office, attended the opening of the exhibition on Wednesday, saying he hopes “Dapsimni will become Korea’s most beloved antique market.”

Items on display at the exhibition include Goryeo celadon, white porcelain, wooden drawers and desks, ink stones and storage boxes for gat, or traditional gentlemen’s hats from Joseon era.

The association says it plans to work to bring the Dapsimni market closer to the people, through producing brochures and Web sites, among other initiatives.