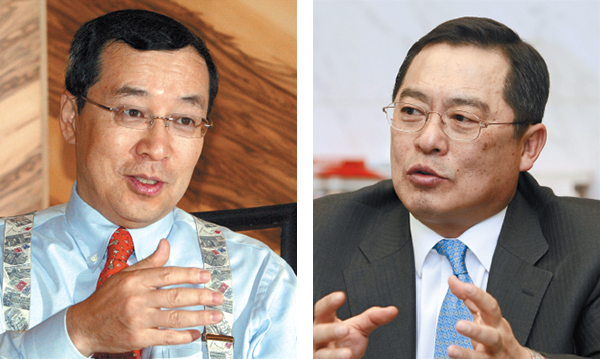 
John Koo, chairman of LS Group, is passing the baton to his younger cousin, an unusual form of family control for Korea.

Koo said yesterday he would surrender the chair of the group to Christopher Koo (also known as Koo Ja-yol), chairman of LS Wire and Service.

John Koo (also known as Koo Cha-hong), 66, has been leading the LS Group since it was spun off from LG Group, country’s fourth-largest conglomerate, in 2003.

The transition will officially take place at a board of directors’ meeting next year when the nation’s thirteenth-largest conglomerate celebrates its 10th anniversary.

But Christopher Koo, 59, will start work as LS Group chairman on Jan. 2 when his inauguration ceremony will be held, the group said in a statement.

Family control of Korean companies is normally restricted to fathers ceding control to their offspring. One exception is Doosan Group, in which power has been shared sequentially by sons of the late founder Park Too-pyung, which has been dubbed “brotherhood management.”

They were younger brothers of the late Koo In-hwoi, founder of LG Group.

John Koo was quoted yesterday as saying that he has “completed his share of work to pave the way for the group to start a second chapter for LS Group.” He said his cousin Christopher “is perfect for heading the group.”

“As the older Koo passes the baton to his younger cousin, LS Group’s principle of ‘cousinhood management,’ whereby cousins take turns managing the group, will be officially launched,” said an executive at LS Group. “As the older Koo will still serve in a key post as the chairman of LS Future Center, the LS Group’s employee training center, he will also support the new chairman’s management.”

After graduating from Korea University with a B.A. in business administration, Christopher Koo joined Lucky-Goldstar International (now LG International) as an entry-level employee in 1978 and worked in various subsidiaries including LG Securities (now called Woori Investment and Securities) and LG Cable and System, which later changed name to LS Cable and System.

He has been chairman and CEO of LS Cable and System since 2008 after serving as its vice chairman for three years.

Koo is the eldest son of Koo Pyong-hwoi, honorary chairman of LPG supplier E1 Corporation, who passed away in October.

Koo Pyong-hwoi?is credited with establishing GS Caltex by forming a joint venture with the U.S.-based Caltex in 1967. He also?founded LPG supplier Yeosu Energy in 1984, which later changed its name to E1 Corp.

Koo is known for an active and challenging management style.

He is also a cycling enthusiast and currently serves as the head of the Korea Cycling Federation.

According to Koo’s aides, he cycles from his home to his office in Anyang, Gyeonggi, two or three times a week.

He was the first Asian to complete the Trans-Alps Challenge in 2002, which requires participants to cycle 650 kilometers (403.9 miles) around 18 peaks in the Alps in eight days.

Market analysts said the extended Koo family is known to be tightly connected.

LS Group, which originally started as four affiliates including LS Cable and System, LS Industrial Systems, E1 Corporation and Yesco, now has a total of 50 affiliates specialized in the related sectors.