Blue House may be raided in retirement home probe

Blue House may be raided in retirement home probe 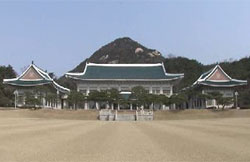 The independent counsel investigating President Lee Myung-bak’s now-scrapped retirement home project has received a court-issued confiscation warrant against the Presidential Security Service, which had led the land purchase in Naegok-dong, southern Seoul, where the president’s home was to be built.

Investigation agencies including prosecutors and independent counsels have never before raided the Blue House. Confiscating materials from the Presidential Security Service offices would be a historic first.

“We’re trying to determine the right time and method for the process,” a spokesman of the special counsel told reporters yesterday.

Last week, the special prosecution team headed by Lee Kwang-bum requested that the Presidential Security Service and other related offices send necessary documents including the original copy of the promissory note that the president’s 34-year-old son signed when he borrowed 600 million won ($542,000) from his uncle Sang-eun, the chairman of DAS Corporation.

When the Presidential Security Service did not respond to the request, the counsel turned to the courts for a confiscation warrant.

The investigation team also sought a 15-day extension for the probe on Friday, but a decision on the matter has not yet been made. The independent counsel’s 30-day probe will end on Wednesday but could see a 15-day extension upon the president’s approval.

If the president turns down the request, the prosecution team will only have two days to complete the raid.

It is unclear whether the investigation team will actually raid the offices in the Blue House, though they received a warrant to do so.

If documents that are managed by government officials are reported to be confidential material that must be kept secret, they cannot be confiscated by prosecutors without approval from related officials.

When a special prosecution team investigated Blue House officials’ involvements in a series of oil and gas development projects led by Korea National Oil Corporation in 2005 under the Roh Moo-hyun administration, they also received a confiscation warrant to look into 50 Blue House officials’ e-mail accounts.

The investigation team received the officials computers at a different location instead of raiding the Blue House offices.

The special counsel has also made a request to question the first lady, Kim Yoon-ok. Investigators banned a man surnamed Seol, an aide of the first lady, from leaving the country.