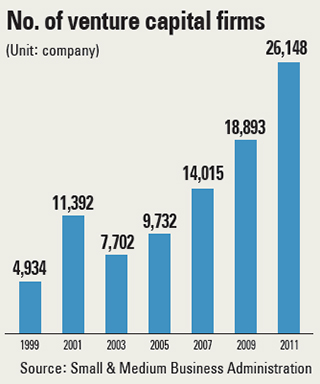 Although robust start-ups in the field of smartphones and mobile gadgets are arguably leading Korea to its first venture capital boom since 2003, few companies appear sturdy enough to go public, a government report showed yesterday.

According to the Korea Development Institute (KDI), 90.6 percent of venture capital firms in the country are start-ups that were created based on government loans or funds. There are over 26,000 as of last year, according to data compiled by the Small & Medium Business Administration.

Korea has a slightly different take on venture capital firms from the West. Unlike in Western countries, where they are created based on spending on new technology by private investors, most in Korea receive government support.

The 90 percent were created based on government funds with the intention of promoting new technology.

“Although we’ve seen the, number of such firms surge recently, I doubt we can call this a second venture capital boom because so few are actually based on venture capital,” said Kim Ki-wan, a researcher at the institute.

Kim said the government has been promoting safe and stable technology start-ups based on government guidelines, which undermines the very essence of venture capital investments.

“The government has erred on the side of caution after learning its lesson during the first venture capital boom in the late 1990s, when PC- and Internet-related companies suddenly mushroomed, but disappeared as bubbles developed due to exaggerated valuations,” Kim said.