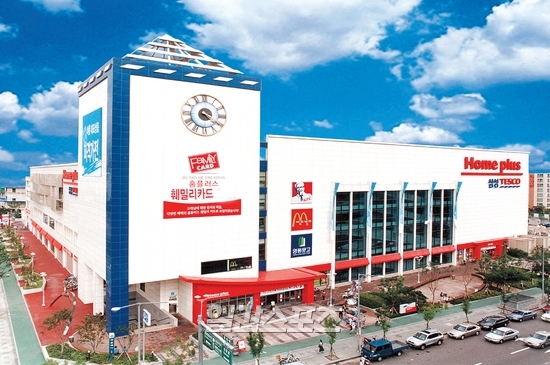 Homeplus, the nation’s second-largest discount chain store, has announced that it will soon open a new outlet in Gwanak District, southern Seoul. The news came after the government and district offices ordered large retailers earlier this year to refrain from expanding new stores.

Gwanak District Office revealed yesterday that Homeplus submitted an application on Oct. 23 to register a new eight-story building. It is expected to be completed in September in Namhyun-dong.

The move has angered small business owners, who have been clashing with large stores for encroaching on their territory. The application came as many large retailers were pledging to abstain from opening new outlets out of respect for the government policy of “shared growth.”

On Oct. 22, representatives from E-Mart, Homeplus and Lotte Mart announced they were joining a so-called Retail Industry Development Council led by the Ministry of Knowledge Economy. They vowed to curtail their expansion as much as possible and seek mutual benefits for large retailers, mom-and-pop stores and district offices.

“Such a store would not be violation of the law as the land is 1 kilometer [0.6 mile] away from Incheon Traditional Market, but we are reviewing it carefully as it is a sensitive issue,” said a local government official.

Meanwhile, small business groups such as the National Merchants Association are organizing protest rallies to up the ante. It said the new megastore would deal a serious blow to the nearby market and small business owners in the area. “If Homeplus reneges on its commitment in this way, merchants will no longer be able to trust large discount stores. It also casts doubt on the legitimacy of the council they have promised to form,” said Shin Geun-sik, a representative of the merchants association.

In its defense, Homeplus said the store had been planned long before it made the pledge to put the brakes on expansion.

“The land was already prepared in June 2008, and construction embarked for January this year,” it said. “Some 30 percent of the excavation work is already finished. We didn’t announce the plan in advance, but it’s hardly fair to say we’re suddenly opening a ‘new’ store.”

It added that Gwanak is one of just a handful of districts in the capital that lack a large discount store and claimed most residents are in favor of its arrival.