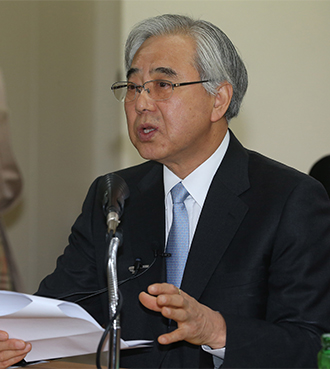 “If I am elected, I will get rid of midterm and final examinations in the first year of middle school,” stated Moon, a 65-year-old Seoul National University professor emeritus, at a press conference yesterday at the Seoul Metropolitan Office of Education in Jongno District, central Seoul.

The position of Seoul Office of Education head is currently vacant after the former superintendent, liberal Kwak No-hyun, was sentenced to prison in September for bribery.

“The first year of middle school is an important period between elementary school and the grades-oriented middle and high school curriculum. It is not right for them to be tied to their report cards,” Moon said. He was selected as the sole conservative contender on Nov. 2.

Instead of a lecture-style education focused on competition through testing, he stated he would encourage these students to get an education that emphasizes experiments, job experience and overnight field trips.

Moon, former head of the Ministry of Education, Science and Technology in 2000, added that the elimination of tests for first-year middle school students will be introduced in stages and be up to the discretion of the school if he is elected.

Over the 27 months of his four-year term, Kwak pushed a string of controversial education polices such as abolishing corporal punishment at all schools, free lunches for all students and founding so-called “innovative schools,” a new kind of public school that focuses on debate-centered classes and extracurricular activities.

Kwak was sentenced to a year in prison on charges of paying out 200 million won ($179,000) to his opponent to drop out of the race in the June 2010 election. His predecessor, Kong Jeong-taek, also was stripped of his position after being involved in a separate bribery case.

Moon said regarding Kwak, “Through various policies such as students’ rights, the free lunch program and innovative schools, you can say that the former superintendent widened prospects in the educational arena,” adding that he will try to “eliminate the negative side effects in order to best revive the original intent” of the previous education reform policies.

Kwak, as a part of his election pledge, promulgated greater freedom for students including freer dress and hairstyles, the right to rally on campus and banning any kind of corporal punishment under his controversial students’ human rights ordinance, which drew a backlash from teachers and parents alike.

The by-election to complete the remaining term as the chief of the Seoul Metropolitan Office of Education, overseeing elementary, middle and high schools in the capital, is slated for Dec. 19, the day of the presidential election.

Even after the election, the remaining time left on the term is not long, so Moon said he hopes his policies can be “the seed for the succeeding education superintendent to advance upon.”

The liberal Seoul education superintendent contender is scheduled to be announced today out of five potential candidates.