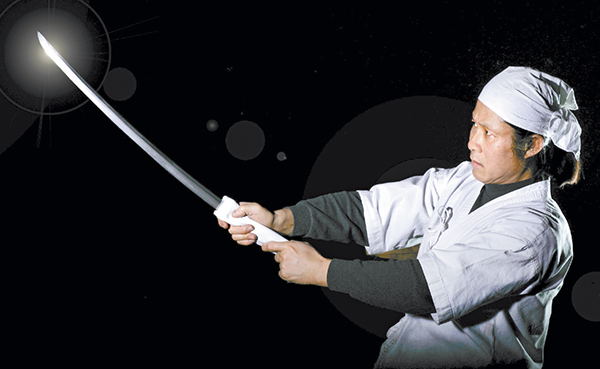 Lee Eun-cheol, a 56-year-old master bladesmith, tests a sword he forged with iron smelted and tempered with traditional methods.


“Soon, I will be able to unveil a shining baekjesingum, which is said to be the finest blade of all,” says Lee Eun-cheol, a 56-year-old master swordsmith.

The restoration of the baekjesingum, a sword developed in Baekje, one of the Three Kingdoms on the Korean Peninsula from 18 BC to AD 660, is one of the major projects of Lee, who has dedicated his life to forging traditional Korean swords.

“I have already succeeded in making a new version of the chiljido, which was designated as one of the National Treasures of Japan,” he says. 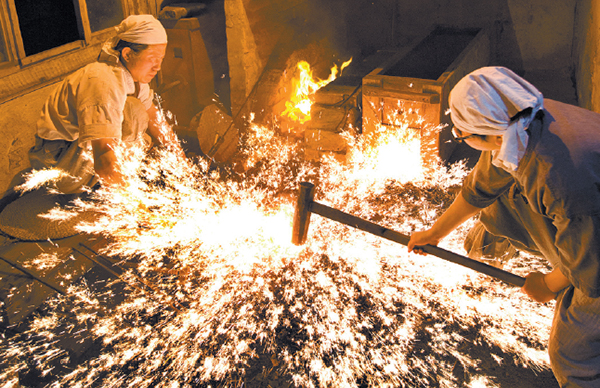 Lee Eun-cheol and his apprentice forge iron for a sword.


The chiljido, which translates to a “seven-pronged sword,” is 74 centimeters (2.5 feet) long with six prongs protruding from the central blade. The inscription on the blade says it was sent as a gift from a Baekje king to a monarch of Japan.

Lee has revived the nation’s traditional iron manufacturing techniques after they died out decades ago.

His workshop of about 33 square meters is located on the slope of a hill of Mount Hyemok in Buknae-myeon, Gyeonggi. It is near the site of the now-defunct Godalsa Buddhist temple, where numerous artifacts of the Silla Kingdom (57 BC - AD 935) and Goryeo Kingdom (918-1392) were discovered.

Korea’s traditional iron manufacturing techniques died out as the modern forging methods were adopted during the Japanese occupation from 1910 to 1945. 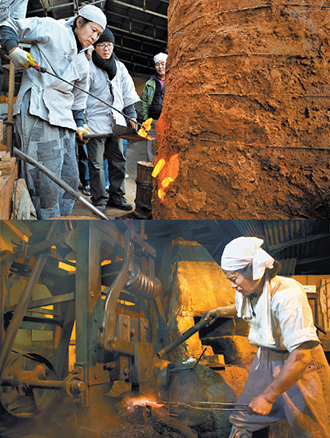 Top: Lee Eun-cheol and his apprentices work with iron in an old furnace. Above: Lee hardens the blade of a sword.

But about 30 years ago, Lee made it his lifelong goal to restore traditional iron smelting and tempering techniques to manufacture swords the traditional way.

Lee read every book he could find about iron and iron manufacturing and traveled all around the nation to find blacksmiths and collect the remains of traditional furnaces. He also visited forges in Japan several times as many Japanese blacksmiths have persisted with traditional techniques.

“Iron made in the fire of oak-wood charcoal has less phosphorus and sulfur,” Lee says. “Accordingly, it doesn’t become rusty as easily as modern iron.

“In addition, iron made in traditional ways is more excellent in terms of its weldability and machinability. So I persist in making swords with traditional techniques.”

Lee is not always forging swords. His other ambition is the restoration of manufacturing skills for iron Buddha statues. Though Korea is well known for its gilt-bronze Buddha statues, iron structures were very popular in the Goryeo period.

“It will be very meaningful to a craftsman of iron to restore the manufacturing skills of the Goryeo iron Buddha,” he says.