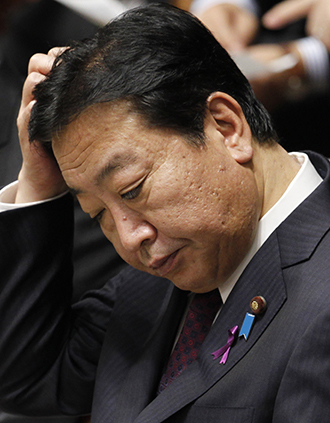 Japanese consumers are closing their wallets as the economy’s outlook darkens, making it harder for Prime Minister Yoshihiko Noda to stave off the nation’s third recession in four years.

Households are holding the most cash since 2005, shunning risk as they grow gloomier, Bank of Japan data shows. Sliding private consumption contributed to an annualized 3.5 percent decline in GDP in the past quarter, a cabinet office report showed on Monday.

While Noda may avoid a fiscal cliff as the opposition becomes increasingly open to a deal on deficit-financing legislation, the consumer malaise highlights the challenge of reviving growth in the world’s third-largest economy. At the same time, as he tries to rebuild relations with China to support exports, Noda may need to come up with more incentives for consumer purchases at home.

“The Japanese government has no choice but to implement additional measures to shore up the economy,” said Junko Nishioka, chief economist at RBS Securities Japan and a former Bank of Japan official.

“The dispute with China, the decline of the stock market and confusion over the political situation in Japan are hurting investors’ confidence.”

Economic outlook sentiment dropped to its lowest level last month since the immediate aftermath of the 2011 earthquake, a government survey showed, with the end of car subsidies and a looming sales-tax increase also making people more pessimistic.

Japan risks its third textbook-definition recession since 2008, meaning two straight quarters of contraction. The median forecast in a survey of economists by Bloomberg News is for an annualized 0.4 percent contraction in the September to December period. Japanese recessions are officially defined by a government-charged panel that considers data beyond GDP figures.

“We need a firm response considering the grim outlook for the Japanese economy,” Economy Minister Seiji Maehara told reporters yesterday. He declined to comment on the size of any new fiscal stimulus measures.

Consumption in the third quarter dropped at an annual rate of 1.8 percent after a 0.4 percent fall in the previous three months, the first back-to-back decline since the global financial crisis, yesterday’s report from the cabinet office showed.

The main index in the government’s Economy Watchers Survey, which looks at how people feel about the outlook for the next two to three months, fell to 41.7 in October, the lowest level since the aftermath of last year’s earthquake. A figure under 50 indicates that more people see conditions deteriorating than improving.

Respondents to the survey included a travel agent in the Tokai region of central Japan, who complained that territorial disputes with China and Korea were deterring people from traveling abroad. A car salesman in Shikoku, southern Japan, said the end of government subsidies for fuel-efficient cars was hurting business, while a supermarket manager in the same region noted concerns among shoppers over a planned doubling of the sales tax.

In other economic releases today, Japan will announce the final reading of September industrial production after preliminary data showed the biggest decline since last year’s earthquake. In a separate report released yesterday, exports from the Philippines gained in September at the fastest pace in 21 months as demand from Asian economies including Japan and Hong Kong rose.

“The government has few tools to boost the economy as its term will end soon, the budget deficit is so huge and political paralysis means it’s hard to agree on measures,” said Hiroaki Muto, a senior economist at Sumitomo Mitsui Asset Management in Tokyo.

The opposition Liberal Democratic Party (LDP) is likely to accept a deal offered by the ruling Democratic Party of Japan to end a stalemate over legislation to fund the rest of this year’s budget, LDP policy chief Akira Amari told reporters in Tokyo on Monday.

Worsening sentiment may be filtering through to the investment market, with BOJ data for this year showing that holdings of securities such as stocks, bonds and investment trusts as a proportion of household assets are at the lowest since 2005.

“People have no incentive to take risks,” said Masamichi Adachi, a senior economist at JPMorgan Securities Japan in Tokyo and a former central bank official. “They are just putting money into banks, and it’s very unlikely they will move to securities in the future.”

Companies are cutting jobs and trimming pay as profits fall. Renesas Electronics Corporation, the world’s largest micro-controller maker, plans to cut thousands of jobs, while TDK, a manufacturer of electric components, will shed 1,000 domestic positions. Sharp, Panasonic and Sony posted record losses last year, and are cutting jobs and production lines in a bid to return to profitability.