Yang opens up about tensions with the Giants

Yang opens up about tensions with the Giants 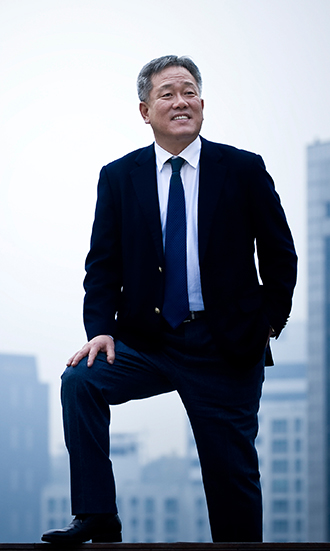 When the Lotte Giants’ 2012 campaign came to an end in Game 5 of the second round of the playoffs, there were plenty of reasons for optimism despite the disappointing loss.

After losing key players like the league’s best slugger Lee Dae-ho in the offseason, the Busan ball club was still one game away from reaching the Korean Series. Manager Yang Seung-ho had led the club to the second round of the playoffs for the second year in a row, and the Giants offense was still arguably the league’s best.

But the club’s front office proved the job is never safe in Busan, a city desperate to end its 20-year title drought, the longest in the 31-year-old baseball league. Lotte abruptly pulled the plug on Yang’s contract on Oct. 30.

The Giants had said that Yang voluntarily offered to step down to take responsibility for failing to fulfill his promise of reaching the Korean Series in two years, but Yang was actually training his players for the international Asia Series tournament when the news broke.

Yang initially left quietly, quelling rumors of friction between him and the club. But the 52-year-old manager broke his silence in a recent interview with the JoongAng Ilbo, where he said he confronted the front office to keep the pressure off his players.

The father of two teenagers, Yang said he told the club early in the season that he would take responsibility for any failures as long as the players were guaranteed breathing room.

“In the early part of the season, some players stepped up such as [pitchers] Kim Sung-bae and Choi Dae-sung, and I thought maybe we could finish in the top four,” Yang said.

“Then the club began to talk way too much about winning the title. So I told them, ‘Stop it. It will put pressure on the players as well. Any manager would want to win and I know that winning brings honor and wealth as well. So as a man, I will take responsibility if I fail to win.’”

The former manager of the Korea University baseball team, Yang was hired in 2010 to replace Jerry Royster.

Royster, the 60-year-old former Milwaukee Brewers manager, was also let go after leading the Giants to top four finishes throughout his three-year stint.

Before Yang and Royster, the Giants were the league’s doormat, finishing last for four straight years through 2004, fifth-place in 2005 and seventh-place in 2006 and 2007.

The Giants were considered to have the fifth- or sixth-strongest lineup in the league at best before the 2012 season, but with Yang’s backing, they got off to a strong start and led the league in late April.

Their standing sank toward the end of the regular season, with the Samsung Lions, SK Wyverns and Doosan Bears passing them one by one. But Giants fans held on to hopes that it was time to revive the glory of 1992, when they saw the team’s second league title.

Yang led the team, which finished fourth in the regular season, past the Bears into the second round of the playoffs to set up a rematch with the Wyverns. The Giants got ahead in the third game of the best-of-five series, but lost the two remaining games.

“To speak with a cool head, it was not a team strong enough to go to the Korean Series,” Yang said.

Lee, 30, who led the Giants’ offense over the past decade, moved to Japan’s Orix Buffaloes before the season. Jang Won-jun, 27, a left-handed ace who went 15-6 last season, also left for compulsory military service. Shane Youman, an American pitcher the team brought in for the season, and Chong Tae-hyon and Lee Seung-ho, the pitchers the Giants acquired from the Wyverns, took the mound this year.

Yang said they weren’t enough to fix the holes in the rotation. He said that was the biggest reason the team failed to reach the Korean Series. He said there was no pitcher available to start Game 4, which he saw as the most crucial game of the series, and asked Youman, who started Game 1, to take the mound again.

He added that he had avoided confronting the club over its lack of investment in pitching, citing his lack of financial knowledge, but did request that the Giants pay more for players.

“They said, ‘We will see what other clubs do,’?” according to Yang. “And I said ‘Why do you look at other teams? Please be a front-runner in investment.’?”

The club finally let go of the manager and brought in Kim Si-jin, who was axed by the Nexen Heroes before the team finished in sixth. Yang declined to criticize the front office for the move and said it may be his fault for failing to foster starting pitchers.