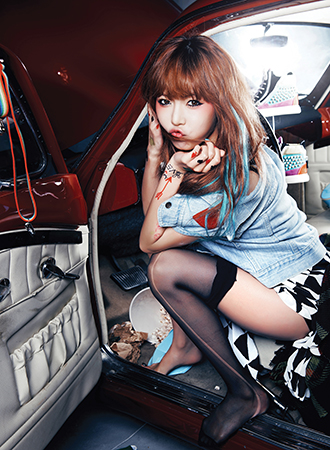 Not that it’s been that long since the breakup of teenaged Hollywood star couple Justin Bieber and Selena Gomez, but Billboard has taken on the task of scoping out a new love for Bieber.

On Monday, Billboard.com published an article titled “Who Should Be His New Girlfriend?” and short-listed seven girls. Hyun-a is first on the list so far, ahead of Carly Rae Jepsen, Jennifer Lawrence, Taylor Swift, Cara Delevigne, Demi Lovato and Rihanna.

The girl group member was deemed fit because “although they may not speak the same language, Biebs and 20-year-old South Korea native HyunA both speak the language of love,” a reference to their songs.

In addition, the fact that Hyun-a made an appearance in Psy’s hit video and the fact that Psy’s U.S. manager is also Bieber’s was mentioned.

The 4Minute member, who is promoting herself as a solo act of late, seems to be turning heads wherever she goes.