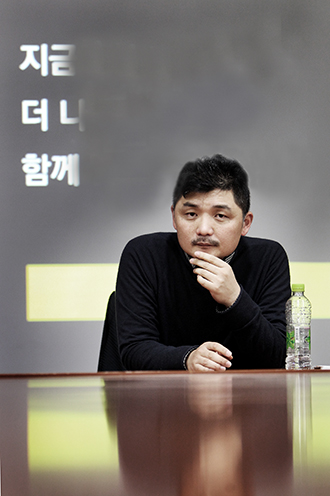 Kim Bum-soo, the 46 year-old co-founder of the nation’s leading search engine NHN and founder and chairman of the social network messenger KakaoTalk, has never settled for anything even with the success that he has enjoyed over the years. He still remains thirsty for finding new business opportunities and the latest interest of his is healing mental health.

Kim goal is to heal the mental suffering of 10 million Koreans which he dubbed the project as “10 million healing.”

More specifically he wishes to help others through psychological evaluation that would help them learn more about themselves.

“The person that one needs to meet through life is one’s self but in most cases people live their lives not knowing who they really are,” Kim said in an interview with the JoongAng Ilbo.

“If people learn more about themselves they get an objective view of whether they are doing okay or not and how others perceive them,” Kim said. “This would be the beginning of solving social conflict and mistrust.”

To achieve his goal Kim earlier this year bought 70.5 percent stake of Mind Prism, a psychological evaluation and consulting company founded by psychiatrist and CEO Jeong Hye-shin in 2004.

However, the program that the company ran was costly. To get psychiatric evaluation customers had to pay 5 million won ($4,608) in answering the evaluation sheets that took more than three hours in answering. Kim wanted the program to be more accessible to others who wouldn’t be scared off by the price. He not only slimmed down the evaluation sheets by reducing the number of questions but also cut the cost down to 80,000 won.

The evaluation sheet now has 600 questions ranging from questions that ask the person evaluated to draw a picture of a tree or more specific questions like what their memories were of their parents and their present life.

Once all questions are answered the evaluated person receives a book with four chapters explaining and psychological treatments specified to that person.

The book will also have charts and graphs showing the person’s current state regarding levels of stress and depression.

It is an unusual move for someone famously known in the IT industry as creating one of the leading IT companies and putting them on the path to success.

Kim, after graduating from Seoul National University with a degree in industrial engineering in 1992, landed his first job at Samsung SDS as he wanted to play with computers all day long. In the five years that he worked at Samsung he also took part in developing Unitel, a PC networking system. Kim’s road to startups came in 1998 when he left his secured job and founded an online game portal company Hangame. He then went on to co-found what later became the nation’s largest search engine company NHN. Yet he moved on and started to develop KakaoTalk, which now has 62 million subscribers worldwide.

Kim said the reason he has taken up psychology is that he was intrigued by a psychiatric evaluation by Mind Prism he had in 2006. Last year he met Jeong and that triggered him to make his investment.

Kim said the 80,000 won charged to customers of Mind Prism doesn’t even make up for the labor or printing costs of the evaluation and the final report. But money isn’t the primary purpose of the venture. Kim said he’s doing the project to give back to society.

Kim is even considering taking this project to the global market. KakaoTalk plans on holding a presentation on Monday of the 10 million healing project.