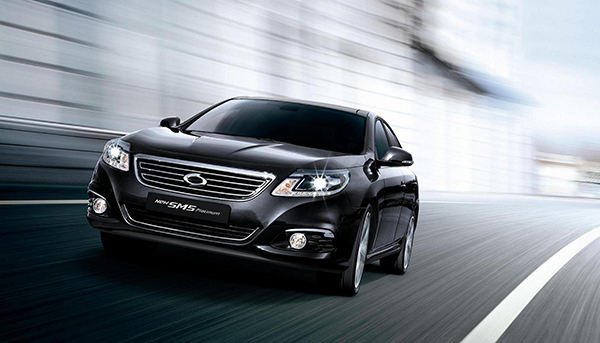 Will the latest incarnation of Renault Samsung Motors’ SM5 carry on its legacy of success and remain a power player in the local midsize car market?

The Korean unit of French automaker Renault last week introduced a new SM5, dubbed the New SM5 Platinum. Although the model has received more of a face-lift than a total reboot, the company has been putting lot of efforts into promoting it. Advertisements are all over the place featuring popular movie actor Yoo Ji-tae.

Industry observers are watching to see how the SM5 does in the market. It’s spiffing up comes at a time when RSM is really struggling.

In the first 10 months of this year, RSM sold only 48,337 vehicles in Korea, nearly half the amount as a year before.

The SM5, which is manufactured in the company’s Busan plant, has been a steady seller for the automaker since its debut in 1998. So far, more than 858,000 SM5s were sold worldwide while going through two full model changes.

The first generation SM5, which was based on Nissan’s Sefiro and its VQ engine, was an especially big hit, selling more than 100,000 units in 2002.

The second generation, which was sold as Renault Safrane overseas, was build on the platform of Nissan’s Teana and hit the local market in 2005. This model upgraded the public’s general impression of a premium midsize car. It was also named one of the safest vehicles in the case of a frontal crash by the Ministry Of Construction and Transportation (now Ministry of Land, Transport and Maritime Affairs).

The third generation SM5, which took 36 months of development and a cost of 400 billion won ($368 million), prompted some doubts when it came out in 2010 as its platform was changed to a Renault-based ones, with its powertrain still coming from Nissan.

But with upgraded features such as a dual-mode air ionizer and fragrance diffuser - firsts for the Korean market - three-zone air conditioning and a driver’s seat with a massage function, the SM5 kept up its reputation and even succeeded in exports to the European market.

Now, people are waiting to see if the 3.5 generation of SM5 can carry on that success.

“We believe the New SM5 Platinum can cement the 14-year legacy of the model,” said Francois Provost, CEO of RSM. “The vehicle will present our company with a platform to rebound.”

RSM said in a statement that it aims to sell 50,000 units next year to clinch a market share of 22 percent. That is more than double the sales of the previous SM5.

The automaker expects the refresh design to appeal to Korean customers because, unlike previous models, it was created at the company’s design center in Yongin, Gyeonggi.

Industry watchers said the new SM5 has a more stylish design than previous ones thanks to newly-added LED lights on both the front and back. For the interior, the automaker upgraded the dashboard with a simple black and white design.

The automaker also hopes that its safety features will attract more customers in their mid-40s. RSM added a blind spot warning system for the first time among local cars in the same segment.

The new SM5 is expected to challenge Hyundai Motor’s Sonata, the No. 1 seller in the midsize sedan segment, which has maintained its market position for over a decade, and its sister company Kia’s K5.

“The basic culture of RSM is to add value of the product,” a spokesman said. “The company hopes to create an exclusive market and culture for the SM5.”