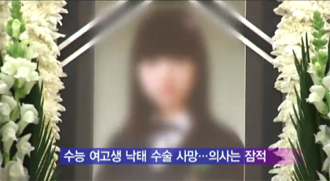 A senior in high school died of excessive bleeding while getting an abortion in her second trimester of pregnancy, police said Wednesday.

The 17-year-old, only identified by her surname Lee, was rushed to a bigger hospital after her heart stopped beating but died of a massive hemorrhage caused by uterine perforation, a side effect that can occur during abortion procedures, according to the police. Lee was 23 weeks pregnant when she was undergoing the surgical abortion last Saturday.

"The abortion itself was not illegal as she was undergoing the procedure with parental consent," a police official said.

In South Korea, abortions are illegal except for pregnancies where the mother is at a serious health risk or has a hereditary physical or mental disease as well as for those resulting from statutory rape or incest. For minors, however, abortions are allowed before their 24th week of pregnancy if they have parental consent.

Police officials said they will further investigate the exact cause of death through an autopsy as well as by questioning the abortion clinic officials and the doctor who performed the surgery. (Yonhap)