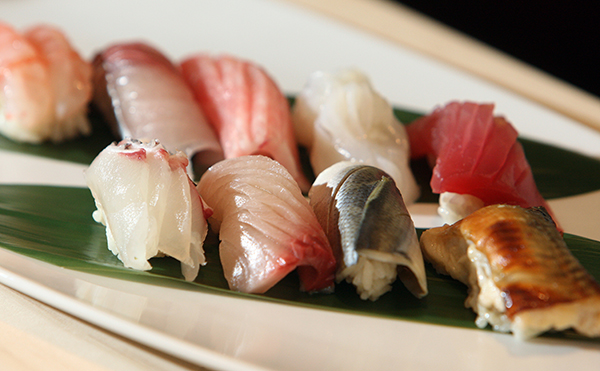 When I bought a sushi plate at a grocery store near my home, I was reminded of globalization. My selection included octopus from Mauritania, purple whelk from Senegal, smelt roe from Iceland, salmon from Norway, a clam from Canada, trout from Chile and a bass from Taiwan. There were five seas and six continents represented in the dozen pieces.

The Korean market used to be dominated by shrimp from Southeast Asia, mostly Thailand and Vietnam, but a few years ago, Saudi Arabian shrimp was introduced. Black tiger shrimp from India and banana-colored Australian shrimp are also popular, and latest newcomer is shrimp from Ecuador, Peru and Cuba.

Mackerel is the favorite for many Koreans, and Norwegian and Canadian fish are rapidly replacing indigenous catches. In late autumn, the half-dried saury is a seasonal delicacy mostly from Taiwan. Shoppers can also find American monkfish and sea eels, Mexican croakers, Russian mackerel, Argentinian skates and Vietnamese webfoot octopus. The halibut sold in bulk in the frozen section is from Guinea.

In fact, the hairtail I had at the cafeteria for lunch looked a bit strange, rather black and thick-boned. The cafeteria manager explained that the fish came from Senegal. African fish are commonly used in cafeterias and institutional food services. Croakers, which boost stamina, are mostly from war-torn Sierra Leone. The squid are from the Falkland Islands off South America or New Zealand, and what we think are octopus legs sold at baseball games are likely to be giant squid from Central and South America. Some restaurants specializing in soy marinated crabs use American blue crab.

The globalization of seafood reminds me of my business trip to Cuba in 2005. I was covering the opening of the Kotra trade center in Havana and heard about a Korean businessman working in the fisheries industry. When Mr. Choi, who lived in Venezuela, visited Cuba in 1990, he learned a curious fact. Sea cucumbers are common in Cuba, which is surrounded by shallow water, but Cuban people do not eat sea cucumbers. So he obtained the exclusive right to gather the sea cucumbers and made a fortune selling them in China and Hong Kong.

Cuban sea cucumbers consumed in Hong Kong is a Ricardian model solution of turning the discrepancy of supply and demand into a trade opportunity. It can be a strategy to fight soaring seafood prices, a phenomenon known as “finflation.”

However, a bitter feeling remains. Depletion of fisheries is a worldwide problem, so how long can we continue to satisfy our appetite with African hairtails? The octopus catch in the poverty-ridden African country of Mauritania decreased by half after Chinese and Japanese boats obtained fishing rights. However, the certificate of origin may be nothing but a label for the gluttony of the people.

The author is a national news writer.