Ahn and Moon’s schism gets deeper

Ahn and Moon’s schism gets deeper


The bitterness between liberal presidential candidates Moon Jae-in and Ahn Cheol-soo deepened yesterday with both lashing out at each other.

Ahn said Moon should sack some of the people around him, whom he blamed for dirty tricks against him and his presidential candidacy. 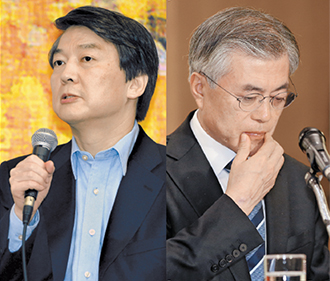 The two liberals began negotiations last week to merge their candidacies so a single liberal candidate can take on Park Geun-hye, candidate of the conservative ruling Saenuri Party.

If both run, they will split the liberal vote and deliver the presidency to Park.

On Tuesday, top aides to the two men started talking and reached five points of agreement. But on Wednesday, Ahn’s camp said it was walking away from the talks because the DUP was spreading rumors through its networks that Ahn would give up his candidacy, which was affecting investments in the so-called Ahn Cheol-soo Fund, which is raising money for Ahn’s campaign.

On Thursday, Ahn’s camp told reporters that the DUP, which is the nation’s second-largest party with 1.9 million party members, was mobilizing its members to support Moon in opinion polls.

Yesterday, Ahn held a press conference at his campaign headquarters in Gongpyeong-dong, central Seoul, saying he wouldn’t return to the talks until Moon purged his campaign of troublemakers. He suggested the DUP was playing the kind of dirty politics that voters no longer liked and should reform itself.

“Political reform should start by breaking away from outdated ways of thinking,” Ahn said. “And to do that [political reform], there is something the DUP must do.

“If Moon shows the will to act on implementing such political reforms, I would like to meet him and discuss single candidacy procedures,” Ahn said, without elaborating on what changes must be made. His camp has made clear it wants to see the DUP’s Lee Hae-chan and Park Jie-won resign. Both are in the pro-Roh Moo-hyun faction of the party.

“The people desperately want a change in the government and the start of a new form of politics, and the responsibility for making this happen rests on the shoulders of Moon,” Ahn said.

“I would like to say that perhaps Ahn’s aides have made exaggerated reports to Ahn,” the DUP candidate said yesterday. “There is nothing that has not been reported to me or problems that have not been resolved in the negotiation process.”

Moon also said, “There was no big problem in the negotiation process that would lead to a breakdown in the talks.”

“Ahn is being greedy, telling [the DUP] to remove people from the party,” said Ahn Do-hyun, co-head of Moon’s campaign.

Meanwhile, the Saenuri Party criticized the infighting in the liberal camp, saying the single candidacy negotiations were but a political show.

Saenuri candidate Park Geun-hye said, “There are so many things to be done to revive our economy, but the liberals are not interested in the people’s lives and are just focused on gaining more political ground.