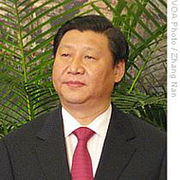 A high-level Chinese delegation will visit Korea next week to meet with senior Seoul officials, a diplomatic source said yesterday, in what would be the first such visit since China’s president-in-waiting Xi Jinping assumed the top post of its Communist Party.

The delegation, led by Chen Baosheng, the vice president of the Chinese Communist Party’s Central Party School, is set to arrive in Seoul on Tuesday for a three-day visit, the source said on the condition of anonymity.

In Seoul, Chen is scheduled to meet with Korea’s First Vice Foreign Minister Ahn Ho-young and other senior politicians to exchange views on this week’s formation of China’s new Politburo Standing Committee, the highest decision-making body, according to the source.

“The fact that China is sending a high-level delegation to Korea shortly after its party congress is a message that the Chinese next leadership puts great importance on relations with Korea,” the source said.

Xi was elected general secretary of the Communist Party’s Central Committee and also named chair of the China Military Commission, which controls the country’s military command. He is expected to officially succeed Hu Jintao as president in March.

Lee said in the message that he hopes the two countries will “deepen and move further forward the strategic partnership on the occasion of the 20th anniversary of diplomatic relations, and continue to cooperate closely for peace and co-prosperity in the region.”

Lee also said he believes Xi will “exercise excellent leadership” for China’s national development and prosperity at a significant juncture as China moves toward a new leap after successfully pushing for reform and openness in the last 30 years.