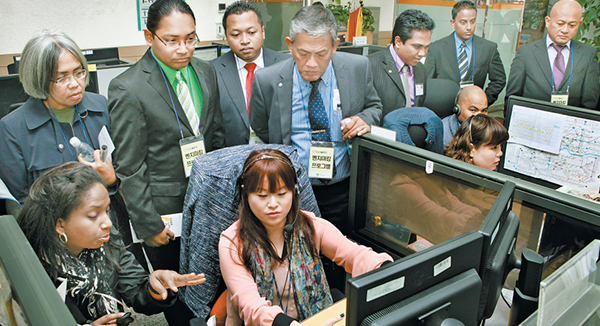 
Around 11 a.m. on Nov. 7, a group of Surinamese wearing headphones were gathered at the Dasan Call Center, a call service that operates 24/7, listening in. In a few seconds, a call came in.

“Hello, I’m at the Incheon International Airport and this is my fifth time visiting the country,” a caller speaking in English said. “I’m trying to go to COEX by taxi, but I feel like drivers here are trying to overcharge me. Could you tell me the average fare from Incheon to COEX?”

“Hold on a second please,” the operator replied.

After accessing its intra-network, which is connected to diverse offices including the transportation bureau under the Seoul Metropolitan Government, the operator provided the information to the caller.

“Perfect. That’s all I wanted to know. Thank you.”

“This is amazing,” Tino Lew, a business analyst at the Suriname vice president’s office, said. “I never saw a call center that can help foreigners in this kind of situation. I hope my country can adopt this system.”

The 120 Dasan Call Center is located in the Seoul Folk Flea Market in Dongdaemun District, central Seoul, providing a free and convenient telephone service where citizens can ask any question regarding daily life issues, including weather, transportation, medical and even government affairs information.

Over the years, 331 government officials, professors and entrepreneurs from 23 countries, including Sweden, China, Russia, Germany and Turkey, have visited the call center since it opened in 2007. It provides foreign language services in English, Chinese, Japanese, Vietnamese and Mongolian as well as in Korean.

Lew came to Korea on Oct. 25 with 11 colleagues to learn Korea’s governance system. The training program focusing on public administration is hosted by the Kookmin Institute for Strategic Governance at Kookmin University and the Korea International Cooperation Agency (Koica).

Koica has been promoting this training program over the years, inviting government officials and civil servants from many developing countries such as Suriname, Afghanistan and Chile.

The goal of the program is to hand down the Korean governance system in various subjects, including economic development strategy, administration development, agricultural leadership and engineering.

“Korea’s electronic governance system is considered one of the best in the world with its strong IT infrastructure,” Park Yoon-jeong, a training program official at the Dasan Call Center, told the Korea JoongAng Daily.

The series of training programs that are supported by the Korean government has a few goals. By handing down the country’s knowledge about the governance system in politics, economics and the legal system to developing countries, the country is aiming to foster Korea-friendly government officials worldwide so they can cooperate with the country in the future.

“I always thought that Korea was only well developed in the IT industry, but it was amazing to learn that the country has one of the best steelmakers,” Soenarijo Moestadja, policy adviser for Suriname’s Ministry of Home Affairs, was quoted as saying when he visited Posco.

“I hope we can develop this type of advanced production facilities so we can utilize our abundant natural resources such as bauxite, gold, iron ore and nickel.”

The Republic of Suriname gained independence in November 1975 from the Netherlands. It is located in South America with a population of 470,000.

“By looking at our factories, they could see the industrial development history of Korea,” a spokesman for Hyundai Heavy Industries said. “I hope they can get ideas for building their own industry system better.”

The Suriname officials also visited historic sites in Gyeongju, including Bulguk Temple, a Unesco World Heritage Site; Cheonman Tomb; and Yangdong Folk Village, to explore 1,000 years of the Shilla Dynasty (57 BC-935); as well as Myongwon Folk House, on the Kookmin University campus in Seongbuk District, northern Seoul. They also tried on hanbok, Korean traditional clothing, and went to tea ceremonies.

“I think they could get a chance to learn about Korea better through this program,” said Hong Sung-gul, director of the Kookmin Institute for Strategic Governance, through a press release. “I hope this can promote an opportunity through which Korea and developing countries like Suriname can work together in business and diplomatic circles.”