Higher learning in the emerging world

Higher learning in the emerging world 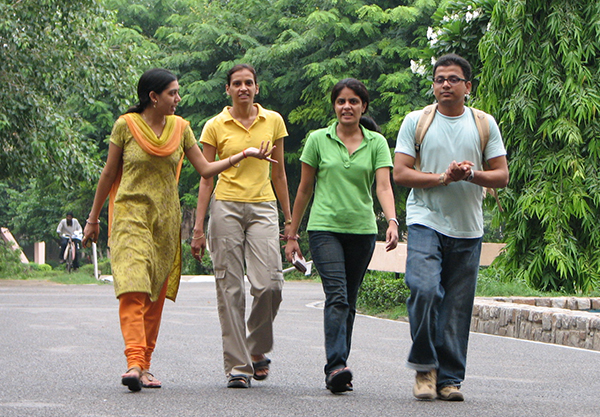 Official delegations from the world’s nine most populous developing countries just met in New Delhi to discuss a subject vital for their countries’ futures: education. The meeting of ministers and others from Bangladesh, Brazil, China, Egypt, India, Indonesia, Mexico, Nigeria and Pakistan, known as the E-9, is the latest in a series of encounters held every two years to fulfill the pledge of “education for all” by 2015.

The E-9 account for 54 percent of the world’s population, 42.3 percent of children not in school, 58 percent of young illiterates (aged 15-24) and 67 percent of adult illiterates (two-thirds are women). So the challenges are enormous: children, from families too poor to think about education, beyond the reach of schooling and too malnourished to study and too few schools, classrooms, teaching resources and adequately trained teachers. Rampant illiteracy underpins other problems, including exploding populations, gender imbalances and widespread poverty.

India provides a good example of how these problems should be addressed. A decade ago, 30 million Indian children were not in school; Today, the figure is three million. A far-reaching Right to Education Act, obliging the state and central governments to provide (as a constitutional right) eight years of free and compulsory education to all children between six and 14, has had a large impact.

This does not mean that all enrolled students will emerge prepared for the information age; but getting children into school is a start. India also needs a relevant curriculum and skilled teachers who can motivate students to learn it - in short, an overdue emphasis on quality, in addition to officals’ understandable focus on access and inclusion.

There are 540 million Indians under the age of 25. The labor force is expected to increase by 32 percent over the next 20 years, whereas it will decline by 4 percent in industrialized countries and by nearly 5 percent in China. India’s favorable demographic profile can add significantly to its economic-growth potential for the next three decades, provided that its young people are educated and trained properly.

Otherwise, the same young people will swell the ranks of the frustrated and unemployed, with unimaginable consequences in terms of social unrest and the risk of organized violence. Maoist groups already target such people for recruitment. If India is to avoid an apocalyptic fate, it must give them a better chance of gainful employment through more and improved educational opportunities.

India has one of the largest higher-education systems in the world, and ranks second in terms of student enrollment. But, while the country now has 621 universities and 33,500 colleges, only a few are world-class institutions, including the Indian Institutes of Technology (IIT) whose graduates have flourished in America’s Silicon Valley. But such institutions are still islands in a sea of mediocrity.

India is entering the global employment marketplace with a self-imposed handicap of which we are just beginning to become aware. For far too long, we were complacent, having produced, since the 1960s, the world’s second-largest pool of trained scientists and engineers. They were more than our then-protected economy could absorb, so many of them left to make their fortunes elsewhere.

Their success meant that IIT was soon mentioned alongside MIT. But it also masked another reality - that there are just not as many of them as there should be. Senior Indian executives whose businesses require them to recruit competent scientists or engineers complain that demand for such talent vastly exceeds the supply.

A World Bank Survey in 2009 highlighted that 64 percent of employers are “only somewhat satisfied,” or worse, with the new engineering graduates they hire. I have spoken to many CEOs who tell me that many, if not most, of their new employees require remedial training before they can begin work, in order to compensate for the shortcomings of their university education. Indeed, companies like Tata and Infosys are hiring people whom they do not consider to be up to par - and spending 6-9 months, sometimes longer, to educate them properly for their jobs.

The need for education reform has never been clearer, and Prime Minister Manmohan Singh’s government has recognized it. Still, India’s spends only 1.2 percent of its GDP on higher education, compared to 3.1 percent in the U.S. or, closer to home, 2.4 percent in Korea. The figure should be higher. So, too, is India’s 3.3 percent share of global output of academic research far too low for a country with 17 percent of the world’s brains.

Education is now recognized as a national priority. More resources are being committed, the corporate sector is being encouraged to get involved, and there is a welcome emphasis on innovation. International cooperation, exemplified by the mutual learning implicit in the E-9 exercise, is also being tapped. The next ten years could witness a dramatic transformation of education in India. But it will not happen without a huge national effort. The rest of the E-9, engaged in similar endeavors, will be watching.

* The author is India’s minister of state for human resource development. His most recent book is “Pax Indica: India and the World of the 21st Century.”