It turns out that President Lee Myung-bak, who promised to be the “economy president” five years ago, wasn’t very successful in propelling the country’s economy into a higher trajectory, according to reports by numerous government-affiliated institutes.

And he doesn’t even look that good compared to four previous presidents in either achieving high growth or improving the livelihoods of the people.

A report by the National Research Council for Economics, Humanities and Social Science disclosed that the Korean economy under the Lee administration has retreated to a level similar to that of the Kim Dae-jung administration from 1998 to 2002.

The first two years of the Kim administration were the hardest time for the Korean economy in its modern history after it was slammed by the 1997 Asian financial crisis. Tomorrow marks the 15th year since the day the Korean government requested a bailout from the International Monetary Fund.

Similarly, Lee came to office shortly before the global financial crisis of late 2008.

“An excuse can be the influence of the 2008 U.S.-triggered financial crisis and the recent euro zone debt crisis for such low growth,” said the report.

Statistics for household incomes also showed the least improvement during the current government. 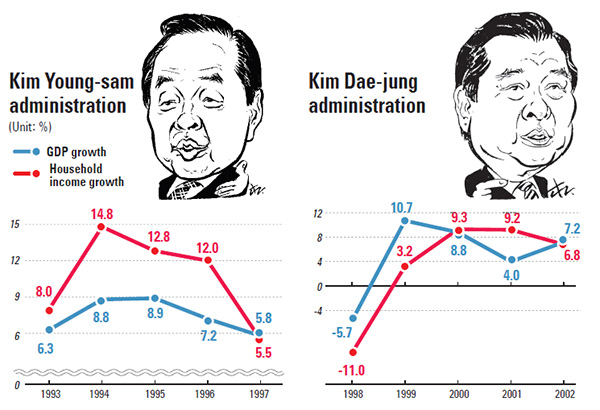 Over the past four years, the average monthly household income stood at 3.63 million won ($3,339.47), rising by 3.7 percent from the previous administration. The increase is almost half that achieved during the Kim Dae-jung administration and a third of Kim Young-sam’s.

“We feel that the country’s power and brand have grown stronger, but we, the people, are feeling the pinch more than before,” said a 55-year-old merchant at Namdaemun Market, central Seoul. “I hear that the economy has got better and large businesses have become more competitive, but that doesn’t make any difference to the people.”

Kim Jung-soon, a 65-year-old street stall owner at the market, recalled her memory of President Lee when he was running for president five years ago.

“I saw him eat a bowl of ‘hangover soup’ at a local diner and promise the owner that he’d revive the economy,” Kim said. “But I think he didn’t keep his words.”

The average annual pay raise during the current government was 3 percent, less than half the 7 percent increase during the Kim Dae-jung administration.

“I am in my fourth year at this pharmaceutical company, but my pay raises have been far below my expectations,” said a 28-year-old employee surnamed Moon. “I had expected I would get 5 to 10 percent hikes every year, but I didn’t get anything like that.” 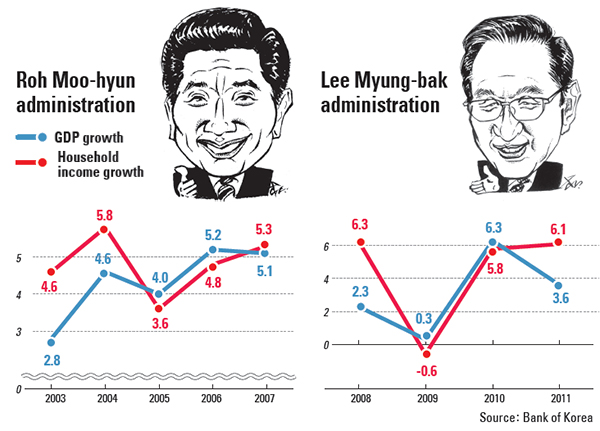 However, another report by the Korea Development Institute said the Lee administration deserves a higher score in terms of shielding the economy from a worse impact from external forces by rolling out measures to stabilize it.

“Tax reductions and enough fiscal spending helped the economy avoid minus growth ever since 2008,” the report said.

The Bank of Korea contributed to easing the shocks from the latest financial crises in Europe by keeping the benchmark interest rate in the 2 percent range, it said.