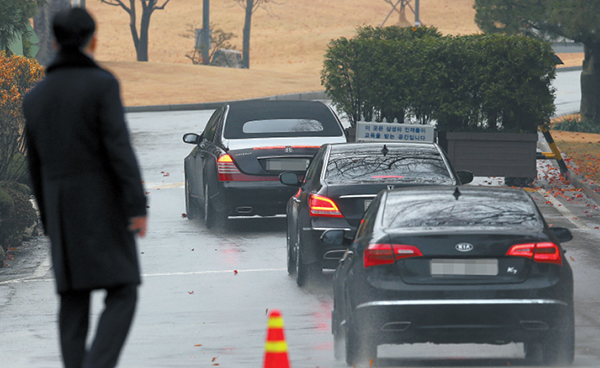 
The 25th memorial service for Samsung founder Lee Byung-chull, also known as Hoam, was a fractious affair yesterday after a schism among his heirs.

Attending an event at 11 a.m. at the family burial ground near the Hoam Museum in Yongin, Gyeonggi, were Samsung Chairman Lee Kun-hee, third son of Hoam, and his wife Hong Ra-hee, director of the Hoam Museum, as well as their three children - heir-apparent Jay Y. Lee, president and CEO of Samsung Electronics; Boo-jin, CEO of Hotel Shilla; and Seo-hyun, executive vice president of Cheil Industries.

After the Samsung group left, the CJ group arrived at 2 p.m. It included 40 executives but not Lee Maeng-hee, first son of the founder, or his first son Lee Jae-hyun.

Although it is a rule for the first son to lead any form ancestral rites in Korea, Maeng-hee is a recluse. It was expected that Jae-hyeon would lead the group, but a CJ spokesman told reporters later in the afternoon that the chairman decided not to “after Samsung banned anyone from the non-Samsung side from entering the burial ground through the front gate.”

Until an inheritance row broke out earlier this year, that rule did not exist. Samsung did not elaborate on the issue. Their family has been ruptured since Lee Maeng-hee filed a lawsuit against his younger brother Kun-hee in February asking him to return part of his inheritance from Hoam. Six trials have taken place thus far.

The Hoam Foundation under Samsung has been controlling Hoam’s memorial services since the founder transferred various plots near the ancestral burial ground in Yongin to Kun-hee, including Everland, his residence inside Everland and the Samsung Foundation of Culture.

A CJ spokesman added that the CJ chairman will perform an ancestral rite to the deceased founder at the CJ HumanVille in Pil-dong, central Seoul, with his own family later in the evening.

Meanwhile, Samsung yesterday began running a 10-day series on Samsung’s blog describing Lee Kun-hee’s past 25 years at the helm of the top conglomerate after he took over from his father.

It is called “The Samsung Story Presented by Samsung” and can be seen on its blog (blog.samsung.com).

Starting with a photo of the chairman holding a gigantic company flag at his inauguration, the first blog post says his “promise to foster Samsung into a global-scale, top-notch corporation 25 years ago has materialized step by step and surprised the world.”

The posting also details facts and graphics such as the growth of Samsung’s annual sales from 1987 to 2012 and the mushrooming of its market capitalization.