Studio sound in palm of your hand

Studio sound in palm of your hand 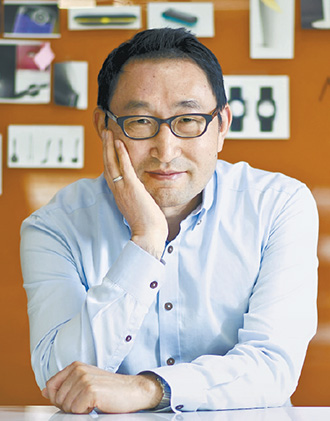 They say a picture is worth a thousand words, but for iriver CEO Park Il-hwan a song or two can deliver even more of an impact - as both a winning sales pitch and a foundation for a media interview.

Instead of describing the new Astell & Kern, which his company released last month, as what it purports to be - namely, the world’s smallest, lightest and cheapest portable audio device for playing digital music of recording-studio quality - Park sat this reporter down on a chair next to his office and pressed play.

Four large and expensive-looking speakers were stacked against one wall with a vacuum tube and graphic equalizer connecting them. Park plugged in the black device - about half the size of the palm of his hand - and sat back listening to a string of hits and classic compositions including Rebecca Pidgeon’s “Spanish Harlem” and Janos Starker’s “Bach Suite No. 1.”

“I used to enjoy listening to music before, but this device gave me a kind of epiphany and made me realize there were so many hidden sounds I couldn’t detect with other devices,” he said.

As well as playing files imported from CDs and MP3s, this slick-looking gadget can play high-definition music that iriver dubs “master quality sound,” meaning it is as good as the raw music heard inside a recording studio.

The quality is said to be up to 1,000 times clearer than that offered by CDs. While the Astell & Kern is not unique in offering this function, it is three times smaller than rival devices sold overseas, the company claims, and its price tag of 689,000 won ($636) is lower. 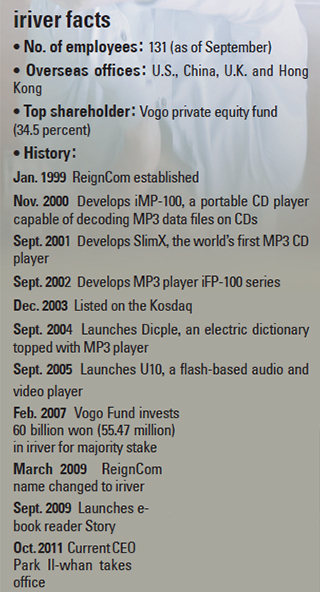 The gadget marks the first ambitious project iriver has embarked on as its flagging business finally starts to bear fruit.

“Sound quality was the answer when our staff members deliberated for a long time on what could differentiate us from other products out there,” said Park.

In the first quarter of this year, iriver posted its first operating profit in 13 quarters, racking up 700 million won on total revenue of 37.8 billion won. This represents a huge turnaround from the last quarter of 2011 when it saw an operating loss of 31.6 billion won.

The Kosdaq-listed firm also remained in the black in the second quarter with an operating profit of 400 million won.

It has not yet released figures for the latest quarter.

The rebound was largely due to two recent products developed and launched with business partners: Story, an e-book produced with Kyobo Book Store, and Kibot, a robot to aid with children’s education, made with leading mobile carrier KT.

“We’re trying to become pioneers in fields that may replace those in which we performed well, such as MP3 players or electronic dictionaries,” he said.

“Our top priority, I believe, is pushing ahead with innovative products.”

MP3 players accounted for 60 percent of iriver’s total sales in 2008 but now make up just 10 percent, suggesting that the 22-year-old company is well on track in terms of re-engineering its business portfolio.

Formerly known as ReignCom, iriver was the first company in the world to develop portable MP3 music players. Up until about eight years ago, its products were so popular that they were compared to powerhouses such as Sony and Apple.

But sales revenue peaked at the end of 2004, and with the rapid rise of Apple and the shrinking size of the MP3 player market, its revenues and status quickly retreated. In 2007 it joined hands with Vogo Fund, a Korean private equity fund, selling a 34.5 percent stake for 60 billion won. The debut of the iPhone in 2008 added to its hardships.

Park took over as CEO from Vogo Fund Chairman Lee Jae-woo on Sept. 1 last year. A graduate of Korea University and holder of an MBA from Kaist, the 54-year-old climbed the corporate ladder step-by-step after starting out as an entry-level worker. 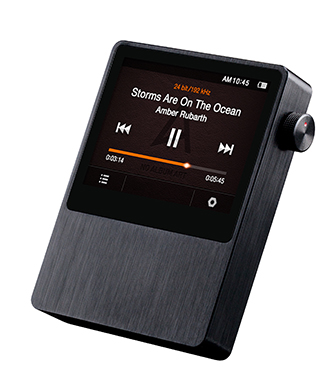 At TG Sambo Computer, his previous workplace, he served as head of overseas sales in 1987 and spearheaded the computer producer’s recovery as a legal administrator after it filed for court receivership in 2005, later becoming CEO.

Park said he believes there are two types of companies: Those that concentrate on design and those that focus on devices.

“The former try to innovate and come up with new products. But those that center on devices simply try to build on what is already out there, and do it cheaper and prettier. I think iriver should be the first kind.”

The Astell & Kern - part of the company’s strategy to become a “designer” - has met with a warm reception from audiophiles in their 30s and 40s, Park said.

It is available across Asia, including in Japan, and in Europe. More export deals are in the pipeline, and some importers have even offered to sell it at a price 1.5 times more expensive than in Korea due to tight supply.

Park said the company also plans to unveil a tablet PC in the near future. As Park believes content is key, it will chase strategic partnerships with content providers ? as it did with Kyobo when coming up with e-book reader Story. Park did not elaborate on details or timing.