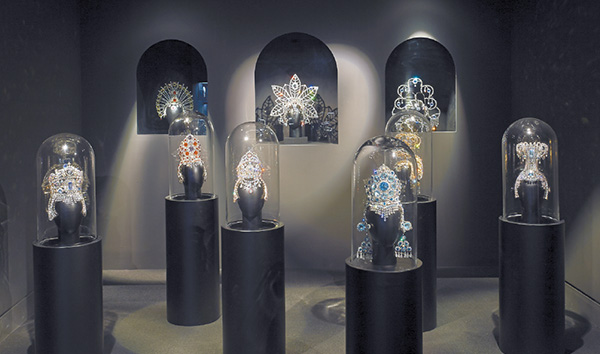 One of the highlights of the “Sparkling Secrets - Swarovski” exhibition is a display of vintage tiaras and hair ornaments. Provided by Daelim Museum


Stepping into the “Sparkling Secrets - Swarovski” exhibit at the Daelim Museum is like crossing the line from reality to fantasy.

The museum in Tongeui-dong, central Seoul, teamed up with Swarovski Crystal, a 117-year-old Austrian company, for the exhibition that will run through Feb. 17.

“Swarovski is one of the familiar brands that we can easily purchase, but people have little knowledge about its artistic side and legacy,” said Kwon Jeong-in, a chief curator at the museum.

“Of the many crystal manufacturers, Swarovski has some of the most excellent cutting technologies and this exhibition truly focuses on its brand heritage and artistic initiatives, such as collaboration projects with famed designers over the past years,” added Kwon.

Swarovski produces about 80 percent of the cut crystals sold in the world.

Although the exhibition consists of 10 subsections, they can roughly be divided into two broad categories: crystal-inspired modern artworks and vintage Swarovski products for the 1960s and 1970s that any woman would admire.

Early iconic crystal products since the 1960s are displayed on the second floor. Of the many items shown, a small mouse crystal ornament is worth a look.

“With this mouse ornament, Swarovski’s ornament history began,” said Kwon as she navigated her way through the darkened exhibition hall. 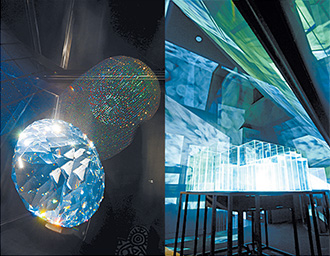 Vintage crystal necklaces, earrings and clutches, worn by muses of the time such as Audrey Hepburn and Marilyn Monroe, are also neatly and elegantly placed in showcases.

The second floor exhibit ends with Xirius 1088, a huge crystal, that represents the Swarovski of today. The huge cut crystal chunk was manufactured earlier this year with earth-friendly technology without using lead.

Third floor display is a step up in flamboyance, with a decade of tiaras and headdresses showcased. Looking at the glittering hair ornaments, it is easy to understand why Swarovski has been enchanting women around the world for more than a century.

Two crystal installations are also noteworthy for the way they maximize the characteristics and beauty of crystals. At the entrance to the third floor is “Ice Branches,” by Dutch industrial designer Tord Boontje. As its name suggests, branches are covered with crystals as if they were snow.

Roll Sp!ke is among three young and budding Korean designer groups that teamed up with Daelim Museum for the Swarovski exhibition.

“We did vast research on Korean artists to find people who can interpret crystals in their own mediums well,” said Kwon. “We chose Chung So-young and two artist groups: Roll Sp!ke and JOH.”

The fourth floor is where there are eight crystal-decorated dresses created by designers such as Christian Dior, Coco Chanel and John Galliano.

Not only ordinary women, but reigning beauties and big-name designers were fans of Swarovski.

Looking around the age and variety of the pieces in the exhibition, one wonders what it is that sustains a brand for such a long period of time? 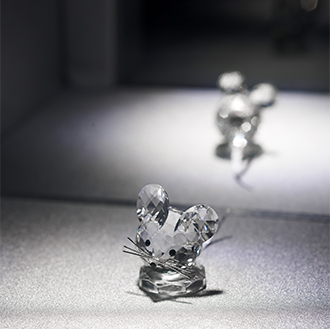 The first ornament manufactured by Swarovski was

For Nathalie Colin, a creative director at Swarovski, the answer is simple: “Fantasy.”

“Glittering crystals are fantastic themselves. They make you forget about your daily routines and feel the fantasy even if it’s just for a while,” said Colin during a recent interview with the JoongAng Sunday.

Swarovski has been holding exhibitions in London, Dubai, Shanghai and many other cities, and it is the first time for the Austrian company to collaborate with Korean designers and unveil its vintage treasures in Seoul.

The exhibition is worth visiting for those who love the brand. And while the overall presentation and content was good, the surreal beauty of the Swarovski crystals was hardly overwhelming because the items and installations were somewhat restrained in size and scale.

In addition, Swarovski is well-known for combining technology with its crystal. For example, light-emitting diodes are used in crystal art to enhance the beauty of the crystals, but such works were not at the Seoul exhibition.