Buses off nation’s roads from today

Buses off nation’s roads from today 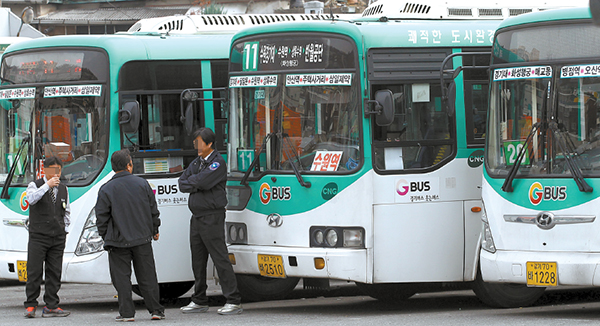 Bus drivers at a garage in Suwon, Gyeonggi, talk yesterday as bus companies across the nation plan to stop services as of dawn this morning in a collective action to protest a National Assembly bill recognizing taxis as public transportation. [NEWSIS]


An unprecedented commuting and traffic nightmare looms today as bus companies across the nation go on strike at dawn this morning to protest lawmakers’ plans to recognize taxis as public transportation.

The National Association of Bus Companies said yesterday it would go ahead with a nationwide strike today starting with the first scheduled runs at 4:30 a.m. The strike will go on indefinitely and is expected to idle a total of 48,000 intercity, city and village buses.

Korea has never had a nationwide bus strike. An average of 15.06 million people use buses per day.

The National Assembly’s Legislation and Judiciary Committee met yesterday and passed a revision of the Act on the Support and Promotion of Utilization of Mass Transit System. The bill is intended to recognize taxis as public transportation, creating legal grounds to provide them with state subsidies and other benefits. It was sent to the Assembly’s plenary session for a final vote. The earliest session to come is scheduled today.

The bus association criticizes the revision as a political move to garner votes ahead of the December presidential election.

“We are extremely sorry for causing inconvenience to people,” the association said in a statement. “Until now, the government, transportation experts and bus industry opposed the bill. We already made clear that the politicians are responsible for the strike if they decided to go ahead with it, but ruling and opposition lawmakers unanimously approved it.”

The association also said recognizing taxis as public transportation will eventually cause an increase in their fares. “To prevent this, we have no choice but to strike,” it said.

Prime Minister Kim Hwang-sik yesterday asked in vain for the legislature to hold onto the bill instead of sending it directly to the main voting session. He also asked the bus industry to cancel its plan to strike.

The finance minister and transportation minister protested the bill at the committee level, but the lawmakers still passed it.

The committee is chaired by Representative Park Young-sun of the opposition Democratic United Party, but yesterday’s session was mediated by another DUP lawmaker, Lee Chun-seok. The Saenuri Party members on the committee also said they respect the standing committee’s decision and supported the passage.

Following the passage, the DUP yesterday tried to clarify some misunderstandings about the bill. It said the bill won’t allow taxis to use bus-only lanes. No immediate subsidies will be given to the taxi industry and there will no financial disadvantage to the bus industry.

The Ministry of Land, Transport and Maritime Affairs announced yesterday emergency measures to deal with the strike. Six cities, including Seoul and Busan, will extend subway operations by one hour, and additional trains will be run on nine metropolitan railways such as the Ilsan Line, Gyeongchun Line and Bundang Line. The ministry said it will also extend operating hours of village buses that are not participating in the strike and mobilize 7,600 charter buses as substitutes.

The government asked public servants to delay starting the workday by one hour. Elementary, middle and high schools were asked to start classes one hour late.

The Seoul Metropolitan Government said it will increase the frequency of subway runs during rush hour.