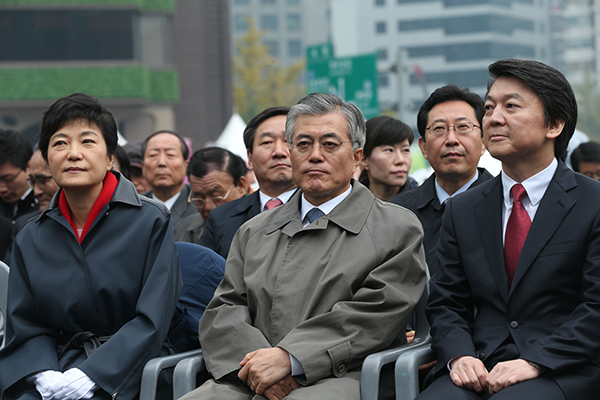 It may sound like irrelevant talk now because the opposition candidate merger may sound far more interesting. However, this is something that former President Kim Dae-jung described as “a matter of life and death.” It is foreign policy, especially presidential diplomacy.

In fact, presidential candidates often say they will work hard to resolve domestic problems before being elected. Domestic problems are not limited to domestic affairs, especially when it comes to the economy. Then, their focus changes once they enter the Blue House. Presidents often invest tremendous time and energy in diplomacy.

Let’s review the foreign visit schedules of President Lee Myung-bak during his five-year term. Since inauguration, President Lee made 49 overseas tours. They include short one-day visits to Japan and a 13-day tour of the United States, Brazil and Peru. He has traveled a total of 233 days out of his 1826-day term. He was in another country or onboard the presidential plane every eight days.

In the meantime, he had 11 summit meetings with the U.S., including seven meetings with President Barack Obama. Taking into account other international occasions, he has met with the U.S. president five to six times every year. He met with Chinese president Hu Jintao 10 times and with Japanese prime ministers nearly 20 times.

President Lee expanded the foreign policy agenda to the Group of 20, climate change, green growth, free trade agreements, nuclear power and arms reduction. At the same time, we are living in times when domestic and foreign affairs are inseparable. Also, a foreign policy expert said that state leaders would decide on major pending issues about states through a closed-door discussion. Moreover, the international community called for Korea’s participation as a G-20 member country. Fundamentally, powers in the region are carefully watching the Korean Peninsula due to its geopolitical location as a strategic military point. The Korean Peninsula has been an arena of competition among world powers throughout history.

After retirement, former President Kim Dae-jung said that Korea was a country that needs diplomacy the most in the world, and its fate was determined by foreign policy. “Mistakes in domestic politics can be fixed, but failure in diplomacy cannot be mended.” After friction in the first meeting with U.S. President George W. Bush, President Kim struggled in foreign policy for a while. Former President Roh Moo-hyun said after his term, “In order to resolve the inter-Korean issues or Northeast Asian issues, we need to be pro-American, pro-North Korean, pro-Chinese, pro-Russian and pro-Japanese.”

The next president is expected to focus on foreign policy as well. The next administration is likely to be a more crucial period than ever. Many feel that the international atmosphere is similar to the latter years of the Joseon Dynasty. The global power dynamics are reorganized into the G-2 system of the United States and China. Obama became more powerful with his re-election, and the next Chinese president Xi Jinping is reluctant to display leadership as a G-2 country.

And the war of the nerves is inevitable between the two leaders. Perhaps, a limited collision between the United States and China may call for Korea to make a choice. And the conservative swing of Japan would make the situation even more complicated.

One of the three presidential candidates will surely become the next president, and each candidate needs to present a detailed and insightful plan to respond to the future. And it is their duty to explain to the citizens. However, there has not been sufficient explanation. Earlier this month, Saenuri Party candidate Park Geun-hye mentioned the international situation three times, and Moon Jae-in and Ahn Cheol-soo discussed the subject twice each.

But their stances remained general at best, “valuing the Korea-U.S. alliance and cooperating with China and Japan.” When the relations with neighboring powers become entangled because of Pyongyang, they all said they would “talk with Pyongyang.” They made optimistic forecasts without providing plans. The only difference comes from the priority of policy, as Park calls “foreign, security and unification policy” while Moon and Ahn say “unification, foreign and security policy.” In the past, presidential candidates revealed their international sense by touring key allies. However, this time, none of them made overseas visits. They seem to have no idea how important foreign policy can be.

It is not that they are indifferent or ignorant. They just want to avoid giving any reason to be criticized. So the foreign policy concerns have disappeared in the presidential election, and they are contending on domestic affairs only. While the Republic of Korea has already become a global player, the presidential candidates seem like local players. It is truly shameful.

* The author is deputy editor of political and international news of the JoongAng Ilbo.