Welfare race is on, but who will foot the bill?

Welfare race is on, but who will foot the bill? 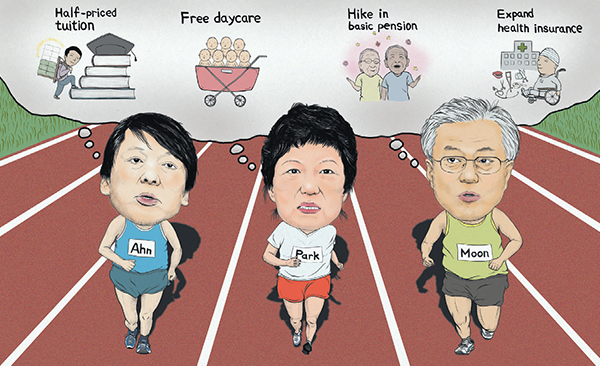 With only 27 days remaining before the Dec. 19 presidential election, debate is raging in both the political and economic arenas over how the three main candidates - Park Geun-hye of the ruling Saenuri Party, Moon Jae-in of the main opposition Democratic United Party and independent Ahn Cheol-soo - will carry out their welfare pledges.

This year’s election has even been dubbed “the welfare war” as the candidates compete on expanded social welfare policies ranging from half-priced college tuition to greater medical coverage for elderly people.

In their bid to lure voters who feel increasingly squeezed by inflation and deteriorating living standards amid the prolonged economic slowdown, “economic democratization” has also emerged as a key buzzword to revamp conglomerates and narrow the gap between the haves and have-nots.

However, the Ministry of Strategy and Finance and other critics are skeptical about just how many of the pledges can be put into action as executing them will require astronomical sums, which would most likely mean higher taxes to make up the budgetary shortfall.

While the candidates continue to gloss over their taxation plans, market observers say the situation could come to a head as grim outlooks for the economy would see the incoming government collecting less revenue from corporate and income taxes.

The Saenuri Party estimates that Park’s welfare plans would cost 73.4 trillion won ($67.2 billion), while the DUP claims it would cost 164 trillion won to realize Moon’s welfare programs. Critics say these predictions have already become obsolete as they were released at least one month before the April 11 general election and have not been updated since.

Ahn, the former CEO of Korea’s leading antivirus software firm AhnLab, is now wrangling with Moon over whether and how to unify their candidacies on the liberal ticket. Ahn has not put a figure on the likely cost of his planned welfare spending. 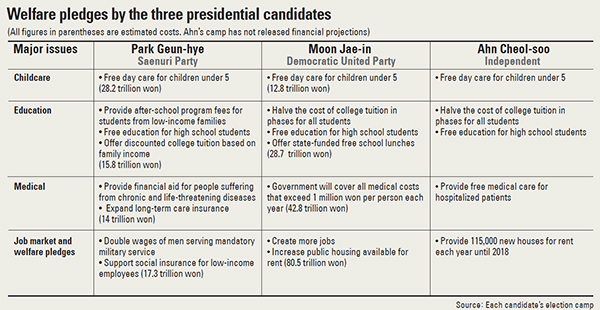 The welfare issue resurfaced on Nov. 14 when Park, the eldest daughter of late President Park Chung Hee, promised she would cover college tuition fees for the third child of all households from 2014 if elected.

She also announced a set of measures aimed at female voters, vowing to triple the amount of financial aid for single parents to help with child rearing to 150,000 won a month, and saying she would provide free baby formula and diapers to low-income households until babies reach their first birthday. She also pledged to help stay-at-home moms get back to work by establishing 30 career coaching centers a year.

“I will create a society that recognizes women’s abilities, a society in which they are not inconvenienced by giving birth or raising children,” Park said, adding that she intends to roll out welfare programs “tailored to each stage of people’s lives.”

Many see in this a significant shift to the left since 2007, when her platform focused more on cutting taxes.

While the candidates differ in many areas, they all agree on the need to reduce by 50 percent the cost of college tuition, provide free day care for children under 5 and free education for high school students.

Park has flip-flopped on the first point but came out firmly in favor of it in August. She also promised to expand long-term care insurance for the elderly and offer more financial aid to people suffering from chronic or life-threatening illnesses.

Meanwhile, under the banner of “universal welfare,” Moon recently promised that his government would cover all essential medical costs that exceed 1 million won per person each year.

Zeroing in on the elderly, Ahn said he would fight for “zero poverty” among retirees and provide free medical care for hospitalized patients and the double the size of the basic national pension. 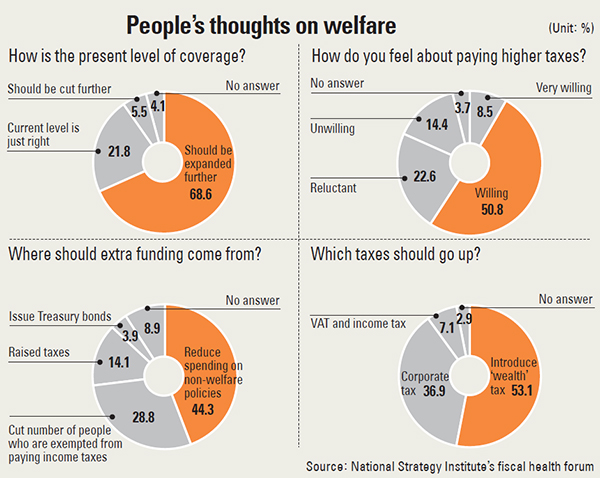 Coming up with the goods

The slew of pledges have exasperated pundits, many of whom ask from which money trees the funds will be plucked.

“The Saenuri Party will need 270 trillion won and the DUP 571 trillion won to execute all of their respective welfare pledges, and this is way higher than what each party has calculated so far,” the Korea Economic Institute said in a report in August.


To secure more tax revenue, the Saenuri Party aims to lower the threshold for the highest income tax rate of 38 percent to those who earn at least 200 million won. It currently stands at 300 million won. The DUP would lower it even further to 150 million won.

In terms of corporate tax, the DUP wants to raise the top corporate tax rate to 25 percent from 22 percent. At present, only companies with annual sales of 50 billion won or more a year are subject to the highest rate. The DUP would lower this threshold to 20 billion won.

To quell fears of skyrocketing taxes, Park said she would cover 60 percent of the cost of her new welfare programs by scaling back “unnecessary” spending on other government programs. The remainder would come from cutting tax breaks.

In contrast, Moon and Ahn would mix lighter tax breaks with a so-called wealth tax on the rich.

“The three candidates have promised to overhaul tax-deduction benefits to secure more tax revenue, but they’ll find out that this will yield relatively small results when they scrutinize the current system,” said an official at the Ministry of Strategy and Finance.

“Of the 27.7 trillion won of tax that was exempted this year, corporate tax only makes up 4.6 trillion won. The rest comes from workers, farmers, fisheries, SMEs and self-employed businessmen .?.?. so there isn’t much the government can do in this area to raise tax revenue.”

Other critics say hiking taxes on companies and the rich could further undermine economic growth.

“Whenever a government raises income or corporate taxes excessively, it can be counterproductive as people will naturally try to find ways to avoid paying, [such as by] relocating their businesses to other countries,” said Sung Myung-jae, a research fellow at the Korea Institute of Public Finance.

While tax increases are seen as inevitable to some degree, candidates seem loath to raise the subject for fear of surrendering votes.

Kang Bong-kyun, a former finance minister who now heads the National Strategy Institute’s fiscal health forum, suggested that the value added tax (VAT) would need to be raised from 10 to 12 percent to satisfy either the Saenuri Party’s or DUP’s welfare pledges.

“Korea’s fiscal health would deteriorate quickly if the candidates try to address the issue of widening economic polarization and enhance the social safety net without coming up with plausible ways of funding all these policies,” Kang said.

He also said easing tax breaks is not a viable option as the current administration has already experimented with this.

In response to claims that this would pose an unmanageable burden for many low-income households by compounding inflationary pressure, he said the onus would ultimately fall on companies to pay the tax and consumer prices would ultimately be stabilized by market forces.

However, Park, Moon and Ahn have all tried to distance themselves from prospective VAT hikes as none wish to follow in the footsteps of former Japanese Prime Minister Ryutaro Hashimoto, who was forced to step down in 1998 after his administration raised VAT from 3 to 5 percent.

Choi Kwang, a professor of economics at Hankuk University of Foreign Studies, said the next government could secure up to 32 trillion won in additional tax revenue a year by adopting the following four-step formula: restoring the comprehensive real estate tax axed by the current Lee Myung-bak administration; raising the individual consumption tax on liquor, cigarettes and gasoline by 50 percent; taxing profits on stock sales; and raising the VAT rate.

A poll on fiscal health by the National Strategy Institute in October suggests tax hikes should be a last resort. Of 1,020 people surveyed on how the welfare pledges should be funded, 44.3 percent of respondents said to scale back non-welfare policies, 28.8 percent were in favor of fewer tax breaks and only 14.1 percent advocated higher taxes.

About half of those in favor of higher taxes said the rich should pay more (53.1 percent), while 36.9 percent said the extra revenue should come from the corporate sector and 7.1 percent pointed to raising the VAT rate.

Noting the unfettered public distaste for additional taxation, Kang said welfare spending hinges on this and the country most of all needs a leader who is not afraid to give the public the choice to decide between the lesser of two evils.