Sante Fe for China makes its mark in Guangzhou

Sante Fe for China makes its mark in Guangzhou 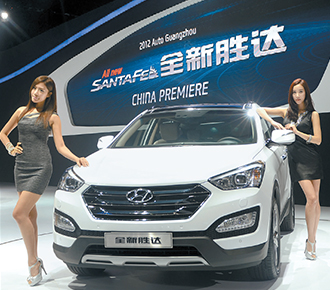 Models introduce Hyundai Motors’ exclusive version of the Santa Fe for China at the 10th Guangzhou International Automobile Exhibition yesterday. The show opens to the public today. Provided by the company

Hyundai Motor is introducing an exclusive version of the Santa Fe for the Chinese market at the 10th annual Guangzhou International Motor Show, which kicks off today for a 10-day run.

The automaker said it hopes the SUV boosts its market share in the world’s biggest automobile market.

Korea’s largest automaker said yesterday it will showcase 20 models including the All New Santa Fe in the southern Chinese city. The motor show, the second-most-important in China after its bigger brother that rotates between Shanghai and Beijing, is being held at the China Import and Export Fair Complex.

Hyundai, which goes by the name Beijing Hyundai in China after it set up a joint venture with local partner Beijing Automotive, said the Chinese version of the Santa Fe has a longer body and is equipped with more high-tech features such as electronic parking brakes and smart parking assist systems.

It will go on sale early next year with a choice of two gasoline-fueled engines, Theta 2.4 GDI and Theta 2.0 Turbo GDI. The former produces 189 horsepower with 24.5 kilogram-torque, while the latter generates 245 horsepower with 35.7 kilogram-meter torque. They will be manufactured at the JV’s third Chinese plant in Beijing, which was finished in July.

Baek Hyo-heum, CEO of Beijing Hyundai, said the company hopes to increase sales of luxury cars and reinforce its premium brand image in China. The automaker made a separate zone at the auto show for its luxury models like the Equus and Genesis.

“This was an important year for Beijing Hyundai as it connects the past and future 10 years,” he said. “The All New Santa Fe will set a new standard in China’s luxury SUV market given its unique style and powerful performance.”

Hyundai has seen strong sales of its localized versions of the Avante, a subcompact sedan. Its Landong and Yuedong have also been steady sellers there, and both were among the top 10 best-selling sedans in China last month. Its ix35, known as the Tucson in Korea, ranked third among top-selling SUVs in October.

Meanwhile, Kia Motors, Hyundai’s smaller affiliate, said it is unveiling the RP, a compact multipurpose vehicle, for the first time in China at the motor show. The successor of the Carens had its world premiere at the Paris Motor Show in September.

Korea’s second-largest automaker said the model will go on sale in China beginning in March.

Kia, which is showcasing 22 models at the ongoing motor show, added that from next week it will also start selling the K5 and Sorento R equipped with a Chinese version of its UVO telematics system. This was made possible by its partnership with China Telecom. The UVO system allows car owners to access their car information in real time and remotely control the vehicle via their smartphone.

Kia hopes to these new introductions add momentum to its sales in China. The automaker sold 378,461 vehicles in the first 10 months this year, up 11 percent from a year ago.