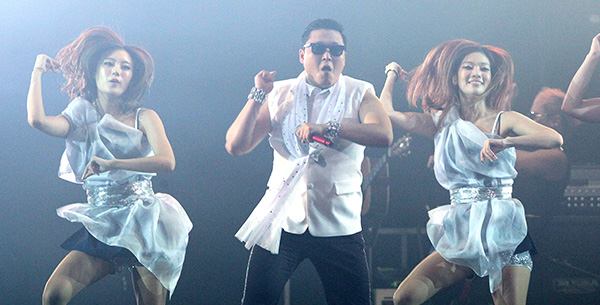 Although he promised a concert at the Honda Anaheim Center in California in January, Psy’s U.S. fans will have to wait a little longer.

Ticketmaster announced on Thursday that the show scheduled to take place on Jan. 26 has been canceled. Meanwhile, YG Entertainment said the show will take place a few months later.

“Because his album that was supposed to be released this month has been pushed back to February, the show had to be postponed,” a YG spokesperson said.

Psy is still promoting “Gangnam Style” abroad, although his hit song dropped to seventh on the Billboard Hot 100.

Although he’s losing ground on the charts, his video is still amassing a whopping number of views daily. As of yesterday morning, the video had 790 million views. Currently second on YouTube’s list of most-watched clips, Psy’s hit will most likely surpass Justin Bieber’s “Baby” by the end of the weekend.

Bieber’s No.1 video is the most-viewed YouTube video with more than 800 million hits over two years.
By Carla Sunwoo