Where is Ahn Cheol-soo?

Where is Ahn Cheol-soo? 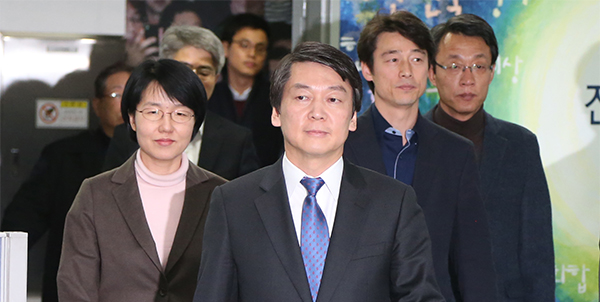 When independent candidate Ahn Cheol-soo unexpectedly announced on Friday evening that he was dropping out of the presidential race, the camp of Moon Jae-in was surprised and baffled. Ahn had been negotiating with them about joining their campaign. Executive members fumed that Ahn acting alone could ruin their chances. His exit was the worst possible scenario.

Negotiations of their candidacy merger had been on thin ice ever since Ahn suspended talks in the previous week and claimed the Moon camp was playing foul. Ahn inevitably decided to walk out since neither could agree on terms to pick who should step aside to field a single candidate from the liberal camp with time running out before the deadline for candidate registration. He feebly urged support for Moon, but whether he meant it or not is unclear. Their apparent fallout served as a blow to the liberal camp in the two-way race, which would have a hard time against front-runner Park Geun-hye even with them joining hands.

Cyberspace was abuzz about the strained negotiations between Moon and Ahn. It was one of the most tragic feuds to occur between like-minded politicians. The sense of camaraderie among the liberals quickly dispersed, and instead, the air turned stale with suspicion and bitterness.

The diehard supporters of the late President Roh Moo-hyun who turned into avid cheerleaders for Moon, the long-time friend and chief of staff of Roh, accused Ahn of playing spy for President Lee Myung-bak and the ruling party. They deleted all the accusatory and negative messages on the social network platforms after Ahn stepped down.

But the harm was already done. Yoo Ah-in, an actor hugely popular with teenagers, was most outspoken. “What rubbish the so-called beautiful union had been,” he tweeted. “Those who denounced Ahn should be ashamed. Fight all you can over power without direction and foundation.” The campaigners for Ahn claimed they were looked down on as illegitimate bastards and the talk about brotherly love and concessions was all part of a play for media attention. Ahn walked out of the race, not because he feared facing Park, but because he was sick and tired of fighting Moon and the Democratic United Party. So far, Ahn looks like the victim and Moon the assailant.

Ahn is said to have made up his mind after a late-night tete-a-tete with Moon in a hotel before his press conference. The two went their separate ways after spending the hour-and-a-half meeting staring at each other. The two were still annoyed at one another from mutual attacks during a TV debate the night before. Ahn returned to his camp grumbling that Moon is not the person he thought he knew. Before announcing his resignation, he told his closest aides that at least he didn’t sell his soul, suggesting how resentful and hurt he was.

In politics, itineraries can tell a lot about politicians. Ahn went straight into hiding after he bowed out of the race. Moon toured a cathedral and a temple carrying a solemn and brooding face. Moon’s camp is waging a two-track strategy in his final run. It is aggressively seeking support from Ahn’s camp. Veteran politicians responded a little, but the key players in Ahn’s camp in their 40s remained bellicose. They returned their text messages, saying they have nothing to say at the moment and that they would get in contact when they are ready.

Moreover, Moon himself is distracted and cannot concentrate on the campaign. He is entirely preoccupied with Ahn. He has been trying to meet up with Ahn through aides. One of his campaigners said, “It is urgent to meet. A picture of him bowing his head before Ahn and two of them clasped in hands could help the campaign a great deal.” He even said Moon wants to pay a visit to Ahn’s parents as soon as Ahn allows.

Still, Ahn remains a major player in the presidential race. What matters are his voters’ choices. Ahn implied ill feelings toward Moon and his camp, accusing them of playing unfairly. In the press conference, he said he failed to narrow differences with Moon and that he would have to put off his dream to pursue new politics a little. It may take time for Ahn to forget and forgive. But the liberals can’t wait that long. They may warn that the blame could be on Ahn if Moon looses the race because he got no help from Ahn.

In fact, there is little that Ahn can do even if he wants to. He would be criticized if he agrees to be a part of Moon’s government in return for his support. If he stands on the front line for Moon, his reasoning for new politics and fighting Moon would be undermined. But then again, if he stays on the sidelines, Moon could be defeated. We may not have seen the last of Ahn. He may surprise us yet again with an unexpected move. Once a celebrity, one cannot break the habit of stealing the spotlight.