Elderly realize too late that derivatives no bed of roses

Elderly realize too late that derivatives no bed of roses 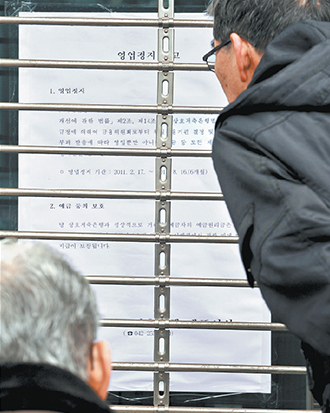 Lee Seon-won, 77, who invested 200 million won ($184,445) in subordinated bonds at the recently suspended Jinheung Savings Bank, is one of many Korean retirees struggling to make ends meet despite having saved up a nest egg.

“It’s not easy living on the small interest rates offered on bank deposits without any income rolling in,” Lee said. “Financial products that promise a slightly higher return can lure anyone into their web, especially if you don’t know much about products like this. “

“The biggest victims of the savings banks [that were forced to close] were elderly people like myself, as we were assured that the financial products we were subscribing to were safe, while they used our money to cover up their losses.”

Lee comes from a privileged academic background as she graduated from the elite Ewha Womans University, yet she was clueless about the risks associated with investing in subordinated bonds.

These are financial products that promise higher returns but also fall lower in the pecking order in the event of liquidation, meaning that if the company - or financial company that issued the bond - goes bankrupt, investors of this class are the last to get their money back.

Companies, especially those with unstable fiscal situations, have been issuing such bonds to keep stable capital adequacy ratios as they are easier to issue than new stocks. 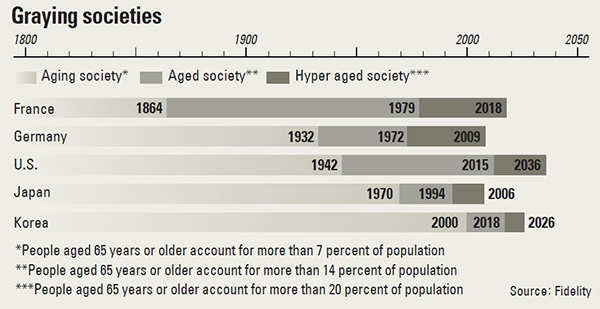 However, experts say it is especially hard for elderly investors to completely understand the nature of such products and the risks that come with them due to the rapidly changing environment.

“Today it’s hard for financial experts to keep track of all these rapidly evolving financial products, let alone elderly investors,” said Chey Wan-ki, a financial planner at ING Life Insurance. “Unless we better educate old people about such investments, we urgently need to establish a system that protects those who do, or who are considering it.”

Korea’s society has been aging at a rapid rate since 2000 and people aged 65 years or older now account for more than 7 percent of the population. By 2026 they are estimated to make up a whopping 20 percent.

Yet there are no financial services targeted and tailored exclusively for elderly investors. Furthermore, Shinhan Financial Group is the only financial institution in the country that offers financial education to elderly customers. Not even the government has such a program.

While many elderly investors remain in the dark, the level of financial risk they are exposed to continues to grow. The main reason they focus on riskier financial products is because the alternative - exceptionally low interest rates at banks - appears so unappetizing, and often falls short of inflation.

“More elderly people are investing all of their savings in high-risk, high-return products as we have entered an era of low interest rates,” said Park Hyung-soo, head of Woori Investment & Securities’ research department for the elderly.

“These products have high yields but they are complicated and come with a risk of huge losses, which may not be appropriate for elderly investors.”

Despite the risks, many continue to pour their life savings into risky derivative products on the advice of bank tellers.

Ahn, 77, is a case in point. In early 2008 he went to HSBC to pick up his matured deposit but ended by subscribing to an equity-linked fund (ELF).

He said he made the investment on the recommendation of a bank employee, but shortly afterwards he learned the same ELF was actually making a loss.

“I still don’t know what this product is,” Ahn said. “I feel like I’ve been conned.”

In 2007, Wi Gye-cheol, 73, went to Kookmin Bank to open a savings account, but ended up subscribing to a China fund. “The employee said that he was taking special care of me as I’m a VIP customer,” Wi said. “But even though I made a huge loss on the investment, the employee moved to another branch and after three years I canceled the fund after losing 40 percent of the principal investment.”

According to the Financial Supervisory Service (FSS), elderly Korean investors have poured 4 trillion won into derivative products like equity-linked securities. This represents 17.1 percent of the 24 trillion won invested in such financial products between July last year and this June.

The problem is that many believe in recommendations made by bank employees.

Elderly people say they trusted bank employees as they considered the banks to be “safe.”

Now, after suffering losses, many say they no longer trust financial companies and they are no longer looking for other investments besides regular deposits.

“Many of the elderly investors blindly put their faith in products being sold at banks, mistakenly believing the bank will somehow guarantee their principal investment,” said Kim In-seon, an employee at KDB Daewoo Securities.

In a joint survey on 164 elderly investors aged 60 or over conducted by the JoongAng Ilbo and Hankook Research, 57 percent said they decide on a financial product on the recommendation of the financial companies’ employees.

The financial authority published a set of guidelines in 2009 advising staff at banks, brokerages and insurance firms to properly explain the financial products that they are selling, including all the risks, with special attention paid to elderly people. The Korea Financial Investment Association also has guidelines advising financial companies to limit their sales of derivative products to older retirees.

However, experts have questioned the practical use of these guidelines as there are no enforceable regulations making the financial companies or employees accountable for damages.

Market insiders say bank employees are selling such products to elderly customers as they are pressured to enhance their performance.

“I once saw one of my colleagues sell a product with a 10-year maturity to a man in his mid-80s,” said Jeon Jeong-yeol, a former employee of Shinhan Bank.

According to Korea Exchange, of all the recorded disputes between investors and brokerages, 80 percent involve elderly investors. In the survey, 63 percent said they have made losses on their principal.