Firms bigger but not richer

Firms bigger but not richer 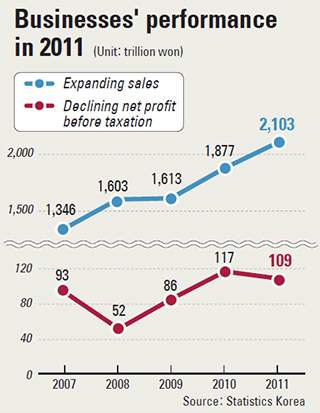 Although local companies are growing in size, many are suffering from performance dips and declining net profits, a government agency shows.

According to a report by Statistics Korea yesterday, the combined annual sales of 11,733 surveyed companies, excluding those in the financial and insurance sectors, stood at 2,103 trillion won ($1.94 trillion) last year, up 12.1 percent from 2010. Average sales per company were 183.4 billion won, a 5.4 percent rise from 2010.

The survey focused on companies with over 50 regular employees or over 300 million won in capital as of last year. The total number went up from 11,045 in 2010.

But their total investment in R&D grew at a remarkable pace to 35.4 trillion won last year, up 12.5 percent on-year, the report noted.

Manufacturers spent 7.6 billion won in 2011, up 10.3 percent from 2010. The increase mostly came among electronics maker and oil refiners.

The number of companies operating in Korea surged 6.2 percent on-year in 2011, mostly driven by a boost in business activities in the manufacturing, publishing and communications industries, the report said.

Companies in the manufacturing sector recorded 5,827, up 7.7 percent from a year earlier.