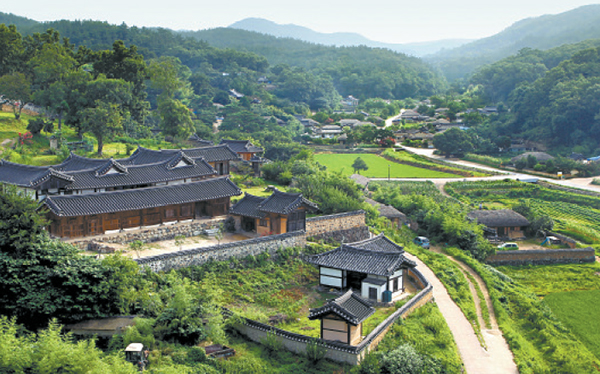 Yangdong Folk Village is home to some 250 residents, which sets it apart from other folk villages where either there are no residents or only few. [JoongAng Ilbo]


GYEONGJU, North Gyeongsang - “Just as Japan has Tokyo and Kyoto, Korea has Seoul and Gyeongju,” Kim Youngna, director of the National Museum, recently said during a lunch with reporters. Both of the former cities offer the glitz and modernity of today’s Asian metropolises while the latter provide a glimpse into their respective countries’ thousands-year-old traditions and histories.

Gyeongju is part of the trio of historical Korean cities along with Jeonju in North Jeolla and Andong in North Gyeongsang. The histories are well preserved in the forms of hanok (traditional Korean houses), folk villages and museums, and are thus among the most popular tourist destinations in the region.

One of the latest additions to the cultural attractions in Gyeongju is the Yangdong Folk Village. The village - home to some 480 traditional Korean houses and 250 residents - dates back to the early Joseon Dynasty (1392-1910) and was named a state-designated cultural heritage site, or Important Folklore Material No. 189, in 1984.

How can this village from hundreds of years ago be a “latest addition?” It was just two years ago when it was added to the Unesco World Heritage List, a move that triggered an major rise in the number of tourists to the area and helped travelers discover the village.

The Korea JoongAng Daily arrived in the Yangdong Folk Village after about a 30-minute drive from Singyeongju Station. Stepping into the village felt like traveling through time. The hanok were surrounded by streams, farms, old-fashioned bicycles and even outdoor markets selling tteok, or Korean rice cakes. It was much more authentic than the Korean Folk Village in Yongin, Gyeonggi, which many critics say is now no more than a set used for period dramas.

“The charm of the Yangdong Folk Village is that it feels like there is no village here, but as you go in, you come across more houses,” said Park Ju-yeon, a culture commentator. “You can hardly capture the whole village in a photograph from any spot, except at the top of Mount Ansan.”

The village was created by the Wolseong Son and Yeoju Yi clans and has housed many prominent scholars of the Joseon period. While the aristocrats resided in the 220 tile-roofed houses, the commoners who served them resided in the 180 straw-roofed hanok.

The highlights of the village include the Seobackdang, the head family house of the Son clan, which is known for its beautiful 600-year-old juniper; the Mucheomdang, the head family house of the Yi Clan with a numaru, or loft that is similar to a pavilion; and the Hyangdan, the house that King Jungjong (1488-1544) ordered built for his beloved official Yi Eon-jeok to take care of his sick mother while he was serving as the governor of Gyeongsang.

“It’s interesting because the village expanded and prospered due to the competition of the two clans,” Park said. “If the Son clan built a beautiful structure, the Yi clan also built an equally gorgeous building.”

One thing that is evidently missing in the village are power and telephone poles. The city of Gyeongju had them installed underground to preserve the village. And that is why officials of the Gyeongju government say the village is a favorite among photographers.

One of the best features of the Yangdong Folk Village is that not only do people live in the hanok, but travelers can also sleep in these traditional houses.