Austerity crisis, not a ‘fiscal cliff’

Austerity crisis, not a ‘fiscal cliff’ 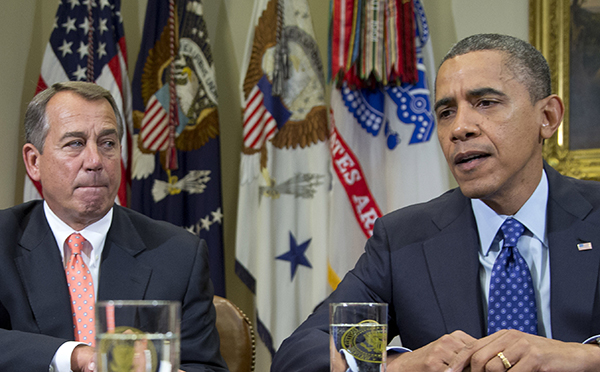 Washington is not known for the stunning clarity with which it frames and addresses tough issues. But has there ever been a debate so mired in confusion as the one around the so-called fiscal cliff?

The trouble starts with the term “fiscal cliff,” which misstates the nature of the problem and provides no hint of how to solve it. I prefer the term “austerity crisis,” which at least describes the real issue - too much austerity, imposed too quickly. (This has the added advantage of sidestepping an increasingly inane discussion over whether the problem is really a “cliff,” “curb,” “slope” or perhaps a “bomb.”)

Here is the crux of it: Depending on what you throw into the pot, the sum of the expiring Bush tax cuts along with currently mandated spending cuts would equal somewhere between $500 billion and $700 billion in deficit reduction in 2013. That’s more than enough fiscal contraction to throw the U.S. into recession. The tax increases alone would reduce the average family’s take-home pay by more than 6 percent. Because everyone agrees that’s a bad thing, Congress could pass a law, tomorrow, preventing it. Done.

But Congress won’t pass that law. Although the problem may be too much austerity too quickly, most everyone in Washington is insisting that the solution should encompass much, much more. In theory, this crisis should be easily resolved: If you have too much austerity, lighten the load. The reason the crisis has become so messy is that the connection between the problem and its solution has been severed.

In fact, proposed solutions inevitably include four or even five distinct categories of policy. There are proposals to address the crisis itself - to reduce the dangerous size and speed of the scheduled deficit reduction in 2013. There are proposals to replace the scheduled deficit reduction with a different set of deficit-reducing tax increases and spending cuts, to be phased in over a longer term. There are policies to redesign the tax code or reform certain entitlements. There’s the need to raise the debt limit, as the Treasury is expected to run out of borrowing authority in February. Finally, there are policies to increase the amount of short-term stimulus and boost infrastructure investment.

So while the proximate problem is too much austerity, too quickly, the solutions being offered address an array of other concerns. Meanwhile, amid these wide-ranging proposals, the conversation in Washington tends to focus exclusively on achieving deficit reduction - even though the economic threat we face in January is too much deficit reduction.

A more sensible approach would deal directly with the problem at hand: the austerity crisis. And that could be defused fairly simply, without doing overly much to harm the deficit. The path would involve identifying policies that pack a big stimulus punch without significantly increasing the deficit. Such “mismatched” policies abound.

The liberal Economic Policy Institute estimates that continuing the payroll-tax cut would create one million jobs in 2013 at a cost of about $115 billion. By contrast, maintaining the Bush tax cuts - yes, all of them, including those on income less than $250,000 - would create only 600,000 jobs while costing $202 billion. Adding to the appeal of the payroll-tax cut is that it’s designed to expire once the economy has strengthened. The Bush tax cuts, once renewed, will probably continue costing the Treasury year after year.

A sensible approach to the austerity crisis would identify mismatched policies - unemployment insurance or disarming the sequestration cuts - that deliver maximum stimulus at minimal cost and then extend, or perhaps even expand, them. With the austerity crisis resolved, and the economy bolstered, we could move onto crafting a long-term budget plan that includes tax and entitlement reform. There’s no real reason that preventing an austerity crisis should be linked to reforming the tax code. There’s no reason at all that raising the debt ceiling should even be a question.

But we’re not taking a sensible approach, and so we’re not getting sensible policy priorities. Instead, many of the least stimulative, most costly policies are widely considered untouchable: the Bush tax cuts for income less than $250,000, for instance. This kind of confusion is what happens when you miscast a crisis of austerity as a crisis of deficits. It’s also a measure of how poorly Washington works. Legislators from both parties have concluded that crises are the only impetus to get anything - and thus the opportunity to get everything - done.

* The author is a Bloomberg View columnist.