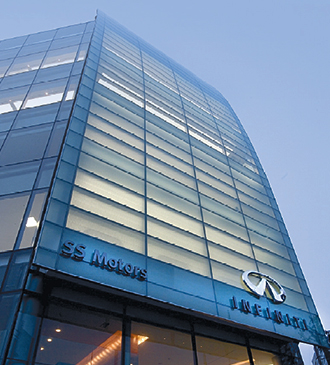 The Infiniti showroom in Apgujeong, southern Seoul, closed recently due to disappointing sales. It opened in 2005. [JoongAng Ilbo]

SS Motors, a local dealer of Nissan’s high-end brand Infiniti which contributes 40 percent to the brand’s overall sales, recently closed one of its two Infiniti showrooms in Seoul due to chronically low sales.

It closed its showroom in the heart of the posh Apgujeong area in southern Seoul after running it for seven years, but is keeping hold of the second outlet in Songpa, southeastern Seoul.

“Sales have been falling in recent years and this has now been going on too long,” said Kwon Ki-yeon, SS Motors CEO. “We got caught in a cycle as we lost our price competitiveness because of the appreciation of the Japanese yen, which means couldn’t do what we wanted to do marketing-wise.” 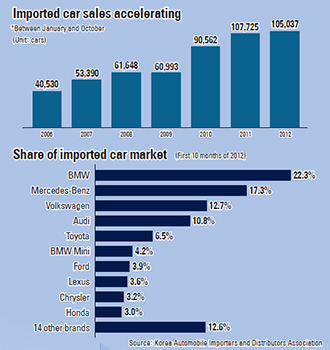 Citroen returned to Korea in April after a decade away. But as of October, it had only sold 185 units, representing just 0.17 percent of the imported vehicle market here.

CXC Motors said it will not let go of its Citroen dealership in Gangseo District, southwestern Seoul - at least not yet.

Metro Motors put the rights for its Volkswagen dealership in Seocho, southwestern Seoul, up for sale this summer but has not found any takers yet.

“In the past, if a company turned in their dealership, other companies were lining up to buy the rights,” said a source in the imported car industry. “But today, because it’s so difficult to turn a profit, no one seems interested.”

Sales of imported cars are reaching new heights but dealers are struggling as competition has become extremely fierce.

This year, foreign cars accounted for over 10 percent of the domestic market for the first time as more consumers in their 30s migrate over from domestic brands like Hyundai and Kia.

Despite the recession, sales of imported cars are expected to continue as younger buyers are increasingly switching allegiances and becoming major customers.

To beat the competition, automakers are flooding the market with new models to dazzle consumers with more choices and offering greater discounts.

The number of foreign car brands operating here increased to 28 this year as Citroen and Mitsubishi reopened their dealerships after earlier packing up and leaving.

Customers now have around 350 models to choose from, including the BMW ActiveHybrid 7 and Mitsubishi Pajero.

As five brands - BMW, Mercedes-Benz, Volkswagen, Audi and Toyota - account for 70 percent of the imported car market here, the other 23 fight to grab what’s left.

But even dealers of the big-selling brands say they are seeing their profits shrink.

Deutsch Motors, which sells BMW vehicles, posted a net profit of 2 billion won ($1.85 million) in the first nine months of the year, down 39 percent from the same period last year. Sales were up 13 percent on-year but discounts, exchange rates and other factors eroded net profit.

Dealers selling Japanese brands like Toyota, Lexus and Honda have been even harder hit, with most seeing deficits.

Dealers on the defensive

Competition among dealers in Seoul is exceptionally aggressive.

Hansung Motor last year opened up a showroom that was only 2 kilometers (1.24 miles) away from The Class Hyosung, a rival Mercedes-Benz dealership. They have been competing ever since.

The fierce competition is even affecting provincial areas as dealers there are affected by rumors that their rivals in the greater Seoul area are offering far larger discounts.

“I’ve heard of people giving up chunks of their commissions to make sales,” said one dealer in the provincial area.

Some are even considering switching over to brands with more selling power to make ends meet.

A 40-year-old dealer of one foreign brand surnamed Park has been in the business since 2004, during which time he has switched brands six brands. The shortest time representing one brand was three months.

“As the people in the industry feel they can move to another brand anytime, there’s not much loyalty,” Park said. “It’s really hard to find a dealer who has worked for the same brand for more than two years.”

One German brand only had 200 salesmen in the greater Seoul area in 2002, but today this number exceeds 1,000, meaning more sales for the automaker but slimmer profits for its representatives as they cut the pie into more slices.

Dealers of imported cars get basic salaries between 800,000 won and 1.5 million won a month on average.

One of the top-selling German brands here doesn’t even offer them a basic salary, meaning they make sales and earn commissions or go without.

This means that if they sell a 60 million won car, after excluding 6 million won VAT (value-added tax) and dividing by 100 they take home 540,000 won. If they were to sell two, they would take home 1.6 million won.

However, the rising competition is making it difficult to sell more than two cars a month, with one being the average and two considered lucky, said a dealer with 12 years of experience.

“German cars are very popular but usually there are about 50 to 60 salesmen at one store,” he added.

“Basically, they ask for the minimum price while some even demand we give up our commission,” the dealer said.

“How can we be expected to do our best and keep customers satisfied if there’s nothing left for us?”

As selling cars has become so competitive, some dealerships are trying to earn profits by offering maintenance services.

Maintenance accounts for roughly 10 percent of dealerships’ overall revenue. However, some have increased that ratio to one quarter.

Such earnings accounted for 27 percent of Iljin Motors and D3 Motors total income last year. They both sell Honda vehicles.

The maintenance service earnings at some dealerships have grown at a faster rate than car sales.

One such company is Deutsch Motors. While automobile sales grew 27 percent on-year in 2011, its earnings from maintenance services grew by 47 percent.

“As there are more imported cars sold in the market, and people have been owning foreign cars for quite a while, demand for maintenance services has naturally climbed,” said a dealer.

But some customers think dealers are charging too much for maintenance fees.

“One could speculate that the dealerships are charging extremely high fees for maintenance as their earnings from the service are rising,” said a 37-year old owner of an imported car surnamed Moon.