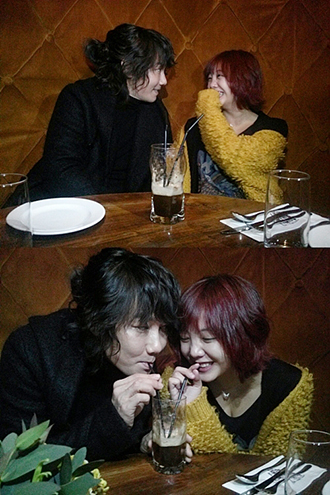 Singer Kim Jang-hoon had netizens confused again by pulling a prank and then blaming himself.

Kim started tweeting about his “relationship” with Ko Eun-a via Me2Day on Friday.

“Who knew a day like this would come, between me and Ko Eun-a. I’m seeing her again next week,” he wrote. He then uploaded a picture of the two sharing a drink together and added, “But don’t worry, it’s not like that.”

Then on Sunday, the 45-year-old singer-activist took to the net again to vent, “So I make it public but no one believes it. I texted her asking, ‘Do I really look that old that it’s impossible to think we are dating,’ and she says ‘Should I tweet that we are dating?’”

Although netizens and media didn’t quite fall for the trick, the quirky entertainer again took to his Web site yesterday, this time to apologize.

“I’m sorry about it all. It wasn’t just to promote my video though,” explained Kim. “As you know, I’ve always had a playful streak and it started off as a joke.”

He also called himself a “rascal” and hoped that Ko wouldn’t suffer from the prank.