“I watched my husband suffer in the hospital until he died and I see no point of enduring what he went through,” said a woman in her 70s from South Jeolla in a phone call to the Living Will Center at the college of medicine of Yonsei University in Seoul.

Jang Kyung-hee, who works at the center, told the woman that a living will is what she needs. “Once you’ve signed the documents, you have refused to have doctors use breathing machines or force tube feeding on you when you are not able to make decisions due to illness,” explained Jang. “It’s best to decide on one’s preferred end-of-life care in advance.”

Jang told the JoongAng Ilbo the center receives up to 80 phone calls about living wills every day.

An average of 50 of those callers go on to sign living wills.

Since the Supreme Court in 2009 accepted the request of the family to stop life-sustaining medical care for a 77-year-old comatose, incurable patient surnamed Kim in a highly publicized death-with-dignity case involving Yonsei University’s Severance Hospital, more and more people have chosen to waive life-support treatment if they are incurably ill and can’t let their preferences be known to doctors.

Park Gil-jun, a 75-year-old former Yonsei University professor, is one of them.

“Who will decide to remove dozens of tubes attached to my body prolonging my life when I’m seriously ill if I don’t have a living will?” asked Park. “If I fall into a situation similar to that elderly woman three years ago, I wish to die in a humane way.” The former professor added he had informed his children of his wishes so they won’t demand measures to extend his life pointlessly.

A recent study by a local university hospital suggests that people are choosing living wills not just to save medical costs that will have to be paid by their families, but because it is their preferred way of dying. The survey showed living wills to be popular with people in the middle and upper classes. 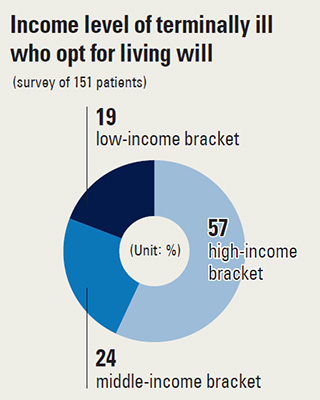 “In fact, many sign the documents in the hope of facing their deaths with dignity,” said Hu Dae-seok, a professor of internal medicine at Seoul National University Hospital.

A patient surnamed Choi who passed away in July 2011 from lung cancer at the age of 61 had signed a living will. “Medical fees that would have been incurred from life-sustaining care were not taken into consideration when the family made its decision,” Choi’s husband, who asked for anonymity, told the JoongAng Ilbo.

Since the 2009 dying-with-dignity case, the number of hospitals accepting living wills, also known as “advanced directives,” has increased to 17, according to the JoongAng Ilbo.

But Korean law hasn’t caught up with the trend, leaving some hospitals responsible for setting their own standards on life-sustaining treatments or procedures.

For instance, Seoul National University Hospital includes cardiopulmonary resuscitation and hemodialysis in options that patients can choose not to receive for their end-of-life treatment, while Yonsei University’s Severance Hospital also includes blood transfusions.

“In order to reduce confusion among doctors and patients, legislation on advanced directives and some standardization is needed,” stresses Hu of SNU hospital.

Despite an increase in awareness of dying with dignity, close to nine out of 10 patients with terminal cancer spend their final days in a hospital rather than at home or at a hospice. According to a study by the Economist Intelligence Unit in 2010, Korea was 32nd out of 40 mostly rich countries in dealing with end-of-life-care, or the quality of death.

A fundamental “change in how medical fees are rated” is needed to encourage more people to die at home with their families, said Hu of SNU hospital.

The fact that a mere 12 percent of patients with terminal cancer use hospice services also has raised calls for more hospice facilities in the country.

“More hospice facilities as well as a policy to encourage people to voluntarily help in hospice are needed,” said Yun Young-ho, director of the social medical team at SNU hospital.