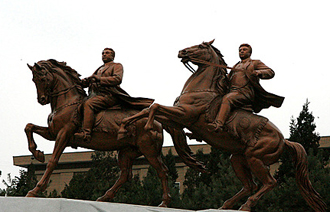 “Since last month, some ethnic Koreans in China who are trading with South Korean people are importing samples of South Korean army uniforms and military items, such as shovels, and smuggling them into Chinese cities, including Guangzhou, to export them into the North,” the source said.

“Although it’s not the first time that the North attempted to import pirated items from the South Korean military, the amount of imports has surged recently, a sign that the regime might be preparing a military act ahead of the election.”

Another source in Dandong, a Chinese region that borders the North, also said, “It is true that the North has been continuously importing military clothes since last month.”

Other sources pointed out that the North Korean political situation is extremely unstable.

“Recently, North Korea has suffered a series of grave incidents,” a different source said. “A rebellious group has attempted to destroy the statues of the two former leaders, Kim Jong-il and Kim Il Sung.”

According to South Korean intelligence sources, in July, a group of local residents in northeastern Ryanggang Province vandalized part of the statues of the two leaders.

This isn’t the first time this has happened in the regime, sources said, followed by a string of similar cases particularly in eastern coastal regions. The North Korean regime has publicly said that it is a “plot” by defectors and they threatened to stage retaliation against them.

The source also said that some North Korean people are spreading leaflets criticizing the dynastic succession almost every day.

The source said that some leaflets not only condemned the Kim dynasty but also supported Ri Yong-ho, the former chief of the general staff of the army who had been at the center of power in the military but was recently dismissed due to unknown reasons.