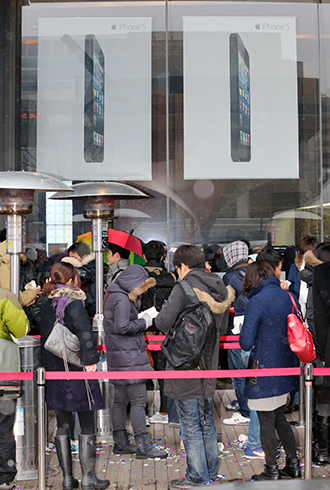 Apple fans who have preordered the iPhone 5 over the Internet wait in line for their new devices at Olleh Square, KT’s headquarters, in Gwanghwamun, central Seoul, yesterday morning.[YONHAP]

SK Telecom and KT, the country’s two biggest mobile carriers, kicked off the release of the first iPhone that runs on fourth-generation long-term evolution (LTE) networks after accepting preorders a week earlier.

While Apple rolled out the latest iPhone on its home turf at the end of September, its Korea release was delayed due to company policy and procedural errors in registering the device with the local communications watchdog.

At midnight, SK Telecom invited 300 people who placed preorders for the iPhone 5 to activate the gadget before dawn and join a launch party with live music by popular artists.

KT, which was the country’s first carrier to adopt the iPhone in the country in 2009, held a celebration at its flagship store in downtown Seoul.

Despite below-zero temperatures and light snow, subscribers eagerly queued for the event, chatting with other iPhone fans while drinking coffee and munching on sandwiches.

“I should have gone to work, but I talked to my company and got permission to come to the event,” said 40-year-old Lee Joon-young, an avid Apple user who confessed he was the first to get Apple’s iPad tablet.

“I’ve only used the iPhone, and I’m really looking forward to its lighter weight and taller display,” said Park Hyun-jin, 25, who arrived at the venue at 5 a.m.

KT said earlier that preorders for the iPhone 5 in the first two hours topped the record the iPhone 4S logged on its first day of preorders in November 2011. Yonhap