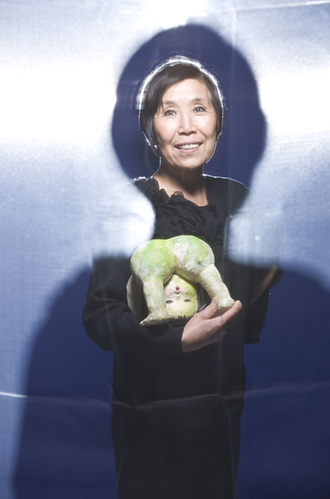 Paper artist Kim Young-hee says she’s happy to be old and plans to focus more on her work.

As a young woman, Kim Young-hee could never understand what her mother meant when she said it.

But the German-based paper artist says now that she’s 69 years old and her five children have all grown up, she not only understands but also entirely agrees with the statement.

“I believe these are the best days of my life. Now I’ve graduated from my life as a mother and I feel lighter and freer than ever before,” she says, adding that she feels reborn as a “real woman, a real artist.”

It was 20 years ago when Kim wrote the book “A Woman who Makes the Child Well,” which tells the story of her life. After her first husband died, she married a German 14 years her junior and left for Germany with her three children from the previous marriage. The 1992 book sold more than two million copies.

In the meantime, she has been busy taking care of her five children and advancing her career as an artist of traditional Korean dak, or mulberry, paper.

She released her second autobiographical essay “Graduating Mother” in Korea. In it, she talks about how she separated from her husband; how her five children have grown up; and the joy and freedom she feels as she reaches her 70’s.

The JoongAng Ilbo recently sat down with the artist, who visited her home country for an exhibition in Korea. The Suka Art Space in Dongnae District of Busan is holding an exhibition called “Kim Young-hee: Recent Paintings & Korean Paper Plastic Art” until Dec. 23.

Q.Why are you looking forward to your 70’s?

A. I feel like I am back to being a woman who has the “freedom to die.” Before, when I was raising my kids, I was bound by obligations as a mother. I told myself, “I shouldn’t’ get sick, I shouldn’t die,” because I have to look after them. But my duties have ended now.

The age 70 means an enormous amount of freedom to me. And I consider my life from now on as a present from God. Finally I can concentrate on my work - the art of mulberry paper. My heart beats with excitement when I think that I can focus 100 percent on my research of traditional Korean paper.

Aging to me is not about getting uglier, but becoming more beautiful. Perhaps that’s why. But I feel like I talk myself up more.

All my life, I talked up my children and my husband, talking about how they were great and they were the best. I guess I never really bragged about myself. After all, how could a woman who has always been criticized by her children and her husband say good things about herself, needless to say feel good about herself?

But that’s not the case now. I have never deviated from my ways due to desire and greed. I never let my children go hungry. They are now all upright individuals. I am so proud of myself. I am beautiful. I keep giving myself compliments. [Laughs]

What was the cause of your separation?

We separated in 1996 and got divorced in 1998. We often clashed on matters related to raising our children. [Kim wrote in her book that her ex-husband was not fit for the role of a father.]

But I am in love again. I have even written a love letter, which I have never done before, in my late 60’s.

I guess considering my age, some people would compare me to “autumn.” But I say I have passed all seasons of my life and am now back in spring.

I do not care for “anti-aging.” I love aging with the passage of time, so I guess I can say I am into “new aging” instead.