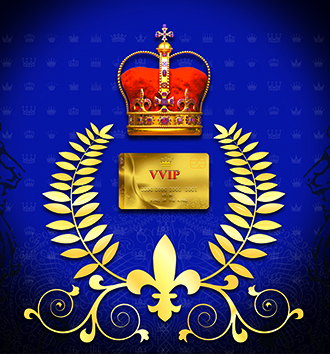 Critics have blasted credit card issuers for continuing to favor the rich despite agreeing to slash benefits for regular customers.

They say the gap between rich and poor is widening among credit card users as?companies are still providing extravagant benefits and services to their VIP users. They have already begun cutting back on incentives for ordinary customers, ranging from free movie tickets to points systems that yield cash savings, and will eliminate more next year.

However, none of the top five independent credit card companies - Shinhan, Samsung, Hyundai, Lotte and Hana SK - were found to have curtailed the?benefits they offer VVIP or VIP card credit card users who pay an annual membership fee of at least 1 million won ($925).

KB Kookmin Card is the only one that has announced it will stop providing free house calls by nurses, a free medical check-up service, and give less air mileage to wealthy customers who use its “TEZE Total Mile Card” and “TEZE Skypass Card” from January.

Hyundai Card said it has not changed its benefits for VIPs.

Acknowledging growing criticism from the public that the benefits it gives VIP users are excessive, Shinhan Card said it will scale them back.

“We’re seeking approval to cut them back from financial authorities and we’ll turn those plans into concrete action if and when we get the green light,” said an employee at Shinhan Card.

Critics say card companies continue to discriminate in favor of those with larger bank balances. Those who pay low membership fees have already lost half of their benefits this year as the issuers try to recoup some of the losses incurred by having to slash their credit card transaction fees on mom-and-pop stores since September at the government’s mandate, they say. 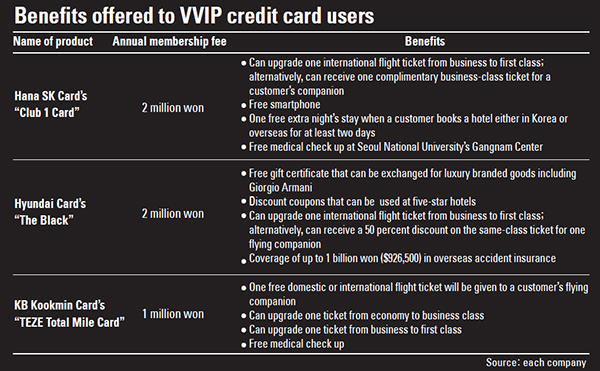 The financial regulators advised credit card companies to offer their top-tier customers fewer incentives this summer, but most responded by simply putting a temporary halt on issuing new VVIP and VIP cards instead so as not to antagonize or risk losing big spenders who boost their profits.

Only CEOs at companies that raise at least 50 billion won in sales a year and senior doctors at general hospitals are eligible for VVIP credit cards, creating an estimated subscription base in Korea of just 4,000 people.

By paying an annual membership fee of 2 million won, VIP and VVIP customers can enjoy a range of benefits worth up to 10 million won. These include upgrading business-class flight tickets to seats in a first-class cabin, or receiving a free ticket for the card holder’s companion on the same flight; a free smartphone; and a complimentary night’s stay whenever they book a hotel in Korea or overseas for at least two days.

“Each credit card company spends at least 1 billion won a year to maintain its VVIP card services, but they’re happy to do this because such customers spend an average of 10 million won a month, and their delinquency rate and membership cancellation rate are both near zero percent,” said an employee at one local credit card issuer. “It’s difficult for us to cut benefits for VVIP card holders as they pay a lot for their annual membership fees, and cutting some benefits would encourage many people to defect to our rivals.”