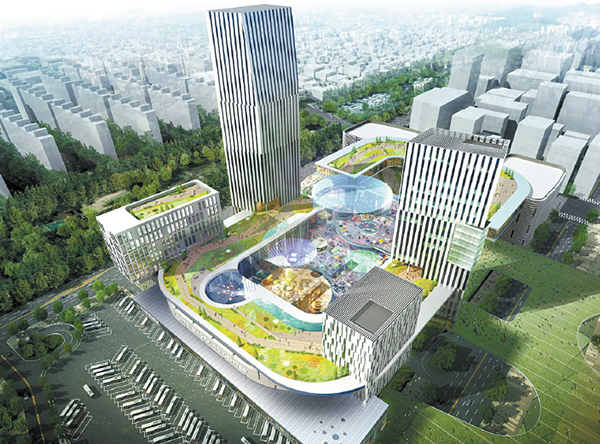 A rendering of the Lotte Shopping complex in Incheon. Provided by the company


Lotte Shopping said yesterday it plans to develop one of its shopping complexes in central Incheon into a mixed-use development along the lines of Tokyo Midtown in Japan or La Defense in Paris to revitalize the downtown area.

In both cases - Midtown Tower in the Japanese capital and Les Quatre Temps just west of Paris - a key shopping attraction spurred the development of other businesses around them, and the conglomerate hopes to do the same with its Lotte Incheon Terminal.

After Shinsegae vacates, Lotte Shopping will take up 34,500 square meters of the site, while the rest of the space in the building will be allocated to Lotte Department Store, Lotte Mart and Lotte Cinema.

Lotte said its goal is to open the terminal building, Lotte Mart and the movie theater by 2015, with the department store set to open its doors by 2017.

It also aims to create an environmentally friendly space by incorporating green space, and will make it a one-stop shopping mall by including a Digital Park for electronic appliances and a Toys “R” Us to appeal to parents and children.

Lotte said it hopes the complex will revitalize the downtown economy, especially around the time of the 2014 Asian Games, which Incheon is hosting some 12 years after Busan did so.

Lotte also expects to attract customers from nearby areas within Incheon including Songdo and Cheongna.

“As Incheon Terminal opens in a piecemeal fashion, many new jobs will be created,” said Noh Yoon-chul, head of Lotte Shopping’s new business division. “We will make full efforts to enhance Incheon’s status as an international city.”

Rival Shinsegae, which claims Lotte’s purchase of the complex is illegal, condemned Lotte’s move and is awaiting the outcome of a legal battle to invalidate the sale.

It said Lotte acted rashly in making the announcement and disregarded the authority of the judiciary as the sale has not yet been finalized.

Shinsegae also plans to file an injunction to stop construction of the complex if Lotte pushes ahead with its move, it said.

Lotte Shopping signed an MOU with Incheon City to buy the plot and buildings in September and the two sides are due to sign a final contract by the end of this month.