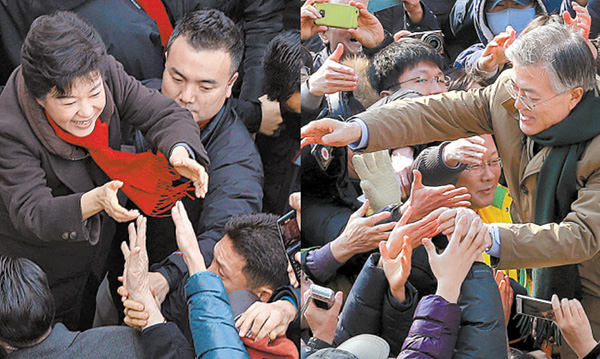 In 10 human rights pledges announced Monday, the Democratic United Party’s Moon promised to bring about rights improvement in the military and reform the military justice system. He also promised to introduce alternative service for conscientious objectors.

“The substitute duties must be more vigorous than military duty,” Moon said. “If the alternative service period is 1.5 times as long as the compulsory military duty, it won’t be seen as unfair.”

In a country technically still at war with North Korea, conscription has been an important part of the lives of all able-bodied men. The mandatory service period is 21 months and a newly enlisted private receives only 81,500 won ($75.74) per month.

Military service is stipulated as one of the four constitutional duties in Korea along with paying taxes, getting an education and going to work.

“This is about more than a few conscientious objectors,” Ahn Hyoung-hwan, spokesman of the Saenuri Party’s central election committee, told the JoongAng Ilbo. “The alternative service system will be an infringement of the constitution. It will also be in violation of the current law that upholds conscription. A social consensus must come first before making such a pledge.”

The issue of providing alternative duties to conscientious objectors, who are required to do their compulsory service or go to prison, has been a sensitive issue for a long time. Since the 17th National Assembly opened in 2004, four liberal lawmakers including Lee Jung-hee, who is running for president for the minor Unified Progressive Party, have sponsored four bills to introduce such a system, but none have made it to a main voting session.

In 2005, the Supreme Court finalized the conviction of a conscientious objector for not doing his military service and the Constitutional Court ruled the current conscription law constitutional.

Former President Roh Moo-hyun made a promise in 2007 - the last year of his presidency - that an alternative service system would be implemented starting in 2009, but the current Lee Myung-bak administration scrapped the plan.

“Until now, Moon fell behind in setting the agenda compared to Park Geun-hye of the Saenuri Party,” said Kim Hyung-joon, a political science professor at Myongji University. “By labeling himself a human rights president, he’s trying to win over undecided voters with this new agenda.”

Shortly after the Korean War armistice in 1953, all members in the Army, Navy and Air Force were required to serve 36 months. Compulsory military duty gradually went down to the current 21 months for Army conscripts, 23 months for the Navy and 24 months for the Air Force.

The service period was shortened once during the Roh administration and the latest cut by three months came last year.

He also promised to increase the number of female troops from the current 4 percent and provide better benefits.

“Under my plan, the number of conscripted troops will go down, while career soldiers will increase,” Moon said. “This is not a populist pledge. It is actually an employment measure to hire a professional workforce for the military.”

Moon also promised to improve the food eaten by soldiers by using organic ingredients. He said the plan will also support the farming industry by giving it massive contracts.

Other educational benefits and living condition improvements were also promised along with better medical cares. Educational, housing and child care programs were promised for the families of servicemen.

“During the Roh government, the defense budget was increased by an average of 8.8 percent annually,” Moon said. “But during the Lee Myung-bak administration, it went up by 5.8 percent, below the increase rate of the total budget.”

Moon also said no soldiers died in armed conflicts with the North during the Roh administration, in which he was presidential chief of staff, but 46 sailors were killed in the sinking of the Cheonan warship in March 2010 and two marines and two civilians were killed during the Yeonpyeong Island shelling later that year.

“The statistics show who had the determination to protect the nation’s security and who was more efficient,” Moon said.

The Park campaign also announced yesterday a series of defense pledges, focusing on strengthening the country’s readiness against attacks from the North.

The Saenuri Party’s former lawmaker Kim Jang-soo, who served as defense minister in the Roh government and accompanied him to Pyongyang during a 2007 summit, announced the pledges on behalf of Park.

“When I was in the Roh government, I made the announcement to cut the mandatory service period to 18 months,” Kim said. “The precondition at the time was eased military tensions between the two Koreas. But now, we see increased tensions such as the Cheonan’s sinking and Yeonpyeong Island shelling.

“I don’t think parents will be swayed by [Moon’s] pledge of a three-month cut,” he said. “And the youngsters today are pragmatic patriots. I don’t see it as a matter to be treated as a vote-getter.”

Park made a pledge to gradually increase the average monthly salary of soldiers to 200,000 won by 2015, but other pledges were focused on the smooth return of discharged service members into society.

She also promised to bolster Korea’s military alliance with the United States and promised to continue smooth implementation of major procurement projects including the next-generation fighter jet purchase and construction of a naval base on Jeju Island.