NKorea has fired its long-range rocket

NKorea has fired its long-range rocket 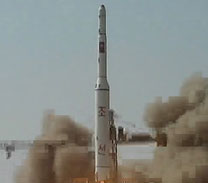 North Korea fired a long-range rocket Wednesday in its second launch under its new leader, South Korean officials said, defying warnings from the U.N. and Washington only days before South Korean presidential elections.

South Korean defense officials said the rocket was fired from a west coast launch pad but there was no immediate word if the rocket was successful. North Korea had indicated technical problems with the rocket and extended its launch window. The officials spoke on condition of anonymity, citing office rules.

North Korea's Kim Jong Un took power after his father Kim Jong Il died on Dec. 17 last year, and the launch also comes about a month before President Barack Obama is inaugurated for his second term.

The North says the Unha rocket is meant to put a satellite in orbit. A similar launch in April broke apart shortly after liftoff, and the condemnation that attempt received is likely to be repeated. Washington sees the launch as a cover for a test of technology for missiles that could be used to strike the United States.

Rocket tests are seen as crucial to advancing North Korea's nuclear weapons ambitions. North Korea is thought to have only a handful of rudimentary nuclear bombs. But Pyongyang is not yet believed capable of building warheads small enough to mount on a missile that could threaten the United States.

North Korea has spent decades trying to perfect a multistage, long-range rocket. Experts say that ballistic missiles and rockets in satellite launches share similar bodies, engines and other technology. This is the fifth attempt at a long-range launch since 1998, when Pyongyang sent a rocket hurtling over Japan. Previous launches of three-stage rockets weren't considered successful.

Washington sees North Korea's pursuit of nuclear weapons and ballistic missiles as a threat to world security and to its Asian allies, Japan and South Korea.

North Korea under new leader Kim has pledged to bolster its nuclear arsenal unless Washington scraps what Pyongyang calls a hostile policy.