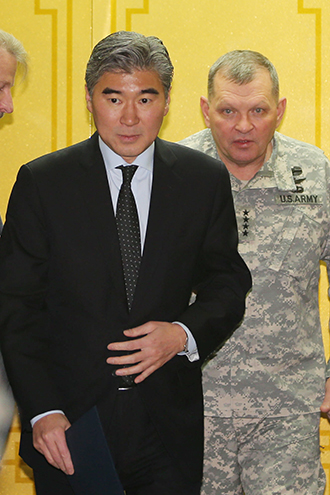 “We verbally requested that the UN Security Council president put together a meeting to discuss matters involving Pyongyang’s missile launch,” a senior official from the Ministry of Foreign Affairs and Trade said yesterday. “The request was also made separately by the United States and Japan immediately after the North’s missile launch was confirmed.”

Morocco holds the presidency of the council this month.

South Korea and the U.S. believe tighter financial sanctions are needed. Sanctions on the North already include a ban on the supply of items that could be used by Pyongyang for its nuclear weapons and missile programs.

Pyongyang’s rocket launch is a clear violation of UN resolutions as it involves the testing of ballistic missile technology. In April, when North Korea unsuccessfully tried to launch a rocket, the Security Council added a so-called “trigger” clause to impose punitive measures on the regime if it launched a rocket using ballistic missile technology or did an additional nuclear test. China and Russia agreed on the clause.

“It is a clear violation of Security Council Resolution 1874, in which the council demanded that the Democratic People’s Republic of Korea not conduct any launch using ballistic missile technology,” Ban’s spokesman said in a statement. “[Ban] is concerned about the negative consequences that this provocative act may have on peace and stability in the region.”

Condemnation followed also by the United States, Japan and China, which verbally tried to persuade the North to drop its launch plan.