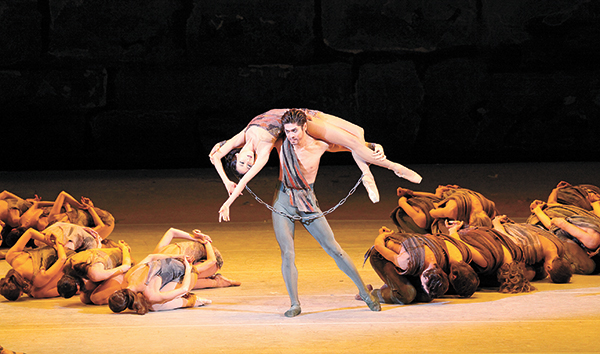 Kim Ji-young and Lee Dong-hoon, center, perform as the two principal roles in Yury Grigorovich’s “Spartacus” on Dec. 6 at the Bolshoi Theater in Moscow. By Damir Yusupov


MOSCOW - On Dec. 6, when the curtain drew and the lights went out at the Bolshoi Theater, the two leads of the legendary choreographer Yury Grigorovich’s “Spartacus” appeared center stage amid thunderous approbation.

The recipients of the standing ovation were not Russian dancers, but two young stars from Korea, a country with only 50 years of experience with classical ballet.

The two dancers of the Korea National Ballet - Kim Ji-young, 34, and Lee Dong-hoon, 26, were invited as guest principals for the Bolshoi Ballet Company’s regular performance of “Spartacus,” which is a Russian ballet that was first staged at the renowned theater in 1958.

It was the first time Korean dancers have taken on the two lead roles at one of the major international ballet companies.

Kim, who has 10 years of experience on foreign stages, looked experienced and comfortable during the performance. Kim’s elegant moves and facial expressions beautifully portrayed the tragic role of Phrygia.

However, Lee, who took on the main role of Spartacus, looked tense throughout. He was short of breath from time to time and even twisted his ankle slightly after a difficult spin at the end of the first act.

But the minor mistake didn’t give him cold feet. His jumps became stronger and undoubtedly dominated the stage when he portrayed Spartacus suffering in heartache.

After the performance, many members of the audience exited the theater praising Lee’s performance.

Vasily Volkov, a trainer at the Bolshoi Theater, said that Lee’s performance reminded him of Mikhail Baryshnikov, a legendary Russian ballerino.

The performance itself was dynamic. When Grigorovich choreographed “Spartacus,” it broke the stereotype of ballets being delicate or feminine. Strong male dancers showed off their chiseled six-packs and kept the action fast-paced.

Jang In-ju, a ballet critic, says it is “exceptional that Korean dancers were cast as the lead roles of the most Russian work, ‘Spartacus,’ rather than a ballet like ‘Swan Lake’ or ‘Gisele.’?

“It attests to the considerable stature of Korean ballet today,” Jang added.

After the performance, the two Korean dancers were flushing with excitement. “I was so nervous my heart was just about to burst,” Kim said. “I am thankful that it ended without any problems.”

Lee also said he enjoyed the performance and added that the Russian troupe was so welcoming he was able to “stay calm.”

It was the director of the Bolshoi Theater, Anatoly Iksanov, who had his eyes on the two Korean dancers after watching the two perform “Romeo and Juliet.”

According to the Korea National Ballet, the two country’s exchanges will continue to take place as the ballet company signed a contract with the Bolshoi Ballet to stage KNO’s creation “Prince Hodong” in 2014.