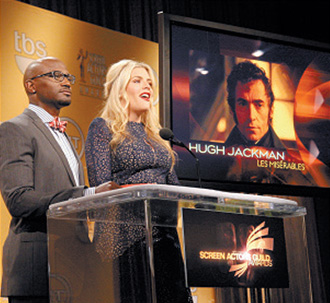 Hugh Jackman is announced as a nominee for Outstanding Performance by a Male Actor in a Leading Role for “Les Miserables” by actors Taye Diggs (left) and Busy Philipps during nominations for the 19th Annual Screen Actors Guild Awards in West Hollywood. [Reuters/yonhap]

“Lincoln,” “Les Miserables” and the comedy “Silver Linings Playbook” led the nominations for the SAG awards with four apiece, including the top prize of best movie ensemble cast.

Joining them with two nominations each were the casts of Iranian hostage drama “Argo” and, in a surprise choice, the British comedy “The Best Exotic Marigold Hotel.”

The awards from the Screen Actors Guild are among the most-watched honors during Hollywood’s film awards season leading up to the Academy Awards because actors make up the largest voting group for the Oscars in February.

SAG voters focus on performances rather than directing and writing, meaning that action and effects-heavy films like “The Hobbit” are usually sidelined.

But the latest James Bond blockbuster “Skyfall” made it onto SAG’s list, with nominations for its stunt ensemble and Spanish actor Bardem’s supporting turn as the blond-haired villain Silva.

Nicole Kidman made the best supporting actress list for her turn in the steamy but little-seen independent movie “The Paperboy,” while Britain’s Helen Mirren was recognized for her portrayal of Alfred Hitchcock’s long-suffering wife in “Hitchcock.”

The SAG awards will be given out in Los Angeles on Jan. 27 in a live telecast on the TBS and TNT networks. Golden Globe nominations will be announced on Thursday and Oscar nominations on Jan. 10.

Hugh Jackman was nominated for best actor while Anne Hathaway is in the race for her supporting role in the movie adaptation of hit musical “Les Miserables.”

Washington, a two-time Oscar winner, was nominated for playing an alcoholic pilot in “Flight,” a role that has been largely overlooked in early critics award.

Perhaps the biggest surprise on Wednesday was “The Best Exotic Marigold Hotel,” the story of a group of elderly Britons who retire to a ramshackle Indian hotel.

Smith also was nominated in SAG’s television category for her role as a sarcastic countess in the period drama “Downton Abbey.”

The popular British show was among the picks for ensemble acting in the TV category.