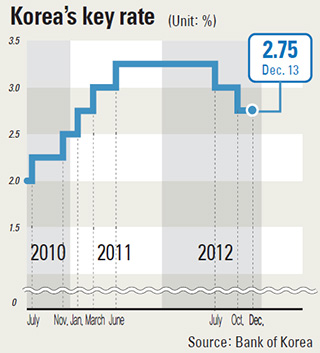 The Bank of Korea yesterday held borrowing costs unchanged before next week’s presidential election and after North Korea launched a rocket in defiance of international sanctions Wednesday.

Gov. Kim Choong-soo and his board kept the benchmark seven-day repurchase rate at 2.75 percent after 25 basis-point cuts in July and October, the central bank said in a statement in Seoul today.

Fourteen of 15 economists surveyed by Bloomberg News predicted the decision and one forecast a 25 basis-point reduction.

Korea’s economic data has given mixed signals and a rapid rebound in growth is “unlikely,” Kim told reporters yesterday after the bank’s unanimous decision.

At the same time, the nation is poised for a “moderate” export-led recovery and inflation will remain low, the BOK said in a statement.

“The economy is still weak but not worsening,” said Yoon Yeo Sam, a fixed-income analyst at Daewoo Securities. “The Bank of Korea will likely hold the rate throughout next year, unless there is a clear and strong signal of economic recovery.”

“The Bank of Korea has no reason to cut rates further unless the won continues to appreciate to levels that invite hot money inflows,” said Park Jong-youn, a fixed-income analyst at Woori Investment & Securities. “I expect no change in interest rates until the end of next year.”

Much of the outlook for Korea’s economy depends on the strength of a recovery in China, said Ronald Man, a Hong Kong-based analyst at HSBC Holdings. China’s new yuan loans trailed forecasts last month, while industrial output and retail sales exceeded forecasts.

“Rising production and stabilizing manufacturing conditions show that Korea remains on track for a gradual recovery,” Man said. “This, however, requires the upward momentum in China to be sustained, as Korea’s growth in 2013 will likely be export led.”

Korea is unlikely to meet the central bank’s growth estimate of 2.4 percent for this year, Bank of Korea Director Jung Yung-taek said on Dec. 6. The economy expanded 1.5 percent in the third quarter from a year earlier, the slowest since 2009. The central bank projects 3.2 percent growth for 2013.

President Lee Myung-bak, whose five-year term ends in February, has resisted pressure from lawmakers for an extra budget to support growth, submitting a 2013 budget that targets a fiscal deficit equal to 0.3 percent of gross domestic product, a six-year low. Both ruling-party candidate Park Geun-hye and opposition nominee Moon Jae-in have promised to boost social spending and increase aid to lower-income families.