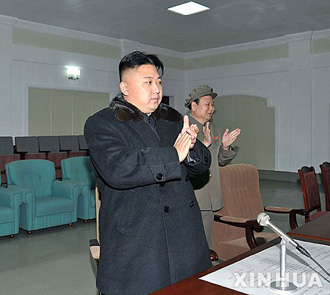 Apparently buoyed by the successful launch of a rocket earlier this week, North Korean leader Kim Jong-un called for his regime to continue its space program, according to Pyongyang's state media.

The North's latest launch has demonstrated at home and abroad the country's "unshakable stand to exercise the country's legitimate right to use space for peaceful purposes and to develop the country's science, technology and economy," Kim was quoted as saying by its official news agency, KCNA, on Friday.

He emphasized the need to continue to launch satellites, a stance that defies United Nations sanctions against North Korea's use of missile technology.

In what is seen as an effort to portray the apparently successful launch as a feat of the young leader in his first year in office, the agency also carried a detailed report on his activity involving the launch.

Kim "gave a final written order regarding the launch of the second version of Kwangmyongsong-3 to the Korean Committee of Space Technology at 8 a.m. on December 12, 2012," it said.

He arrived in the control center a hour before lift-off, it added.

Kim was accompanied by Jang Song-thaek, vice chairman of the National Defense Commission, and Pak To-chun, secretary of the Central Committee of the Workers' Party, it said.

North Korea did not publicize its plans for the launch to its citizens but in the wake of the test has repeatedly broadcast related news.

Meanwhile, the U.S. condemned the North's leader, saying his reported comments show that he is interested only in his weapons program despite widespread starvation in the nation.

"That also means he doesn't care about the future of his people because they're just going to get poorer and hungrier and suffer more if that's the course that he wants to take," State Department spokeswoman Vitoria Nuland said at a press briefing.

She reiterated Washington's call for the young leader to choose the path of peace and co-prosperity.

"He's making the wrong choices right now," Nuland said, "So we are left with continuing to increase the pressure, and that's what we will do to try to encourage them to change course, working with our partners." (Yonhap)