Pitcher says his contract with Cubs is official

Pitcher says his contract with Cubs is official 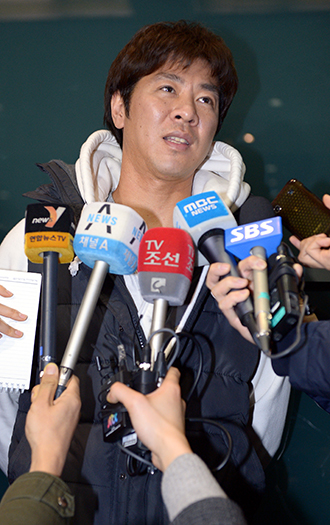 Lim, who played for Tokyo’s Yakult Swallows for five seasons through this year, returned yesterday from a five-day trip to the United States, during which he said he signed a two-year deal with the Cubs.

“I thought that the Cubs and I were seeing eye-to-eye over the terms of the deal,” Lim, 36, told a press conference at Incheon International Airport upon arriving from the U.S. “I set foot in Japan with little attention and a dream has come true this time in a similar way.

“It is a new challenge.”

Lim and his agents said the deal was a split contract, which allows for various salaries depending on career scenarios. The amount was known to be up to $5 million. There was no official announcement from the Cubs as of yesterday evening Korea Standard Time.

He is the third Korean to sign with a MLB team after playing in both Korea and Japan. Lee Sang-hoon had a brief stint with the Boston Red Sox in 2000 while Koo Dae-sung played a season with the New York Mets in 2005.

In his 13-year career in the Korea Baseball Organization, Lim recorded a 3.25 ERA in 534 appearances including 128 starts and earned 104 wins against 66 losses. He shined as a reliever in the latter part of his career, recording 168 saves.

It was his second attempt to play in the United States after his unsuccessful attempt one decade ago. Lim, who made his professional debut with the Haitai Tigers, the predecessors of the Kia Tigers, in 1995, tried to enter MLB through the posting system in 2002.

He dropped the attempt after MLB teams showed little interest in him, bidding just $650,000 or less to earn exclusive rights to negotiate with him.

Lim moved to Japan in 2008, where he built a reputation as a reliable reliever. He recorded 128 saves and a 2.09 ERA over the past five years. He recorded 231 strikeouts over 233 innings.

The pitcher and his agents said some other MLB clubs had offered him more money, but Lim chose the Cubs due to Chicago’s willingness to help with his rehabilitation from the surgery.

According to Lim’s agents, the Cubs are known to have had an interest in the pitcher for a long time, attracted to his side-armed fastball.

Jed Hoyer, the general manager of the Cubs, said in a recent interview with MLB Network Radio that the team needs “a lot of depth in the bullpen.”

The team brought in Japanese pitcher Kyuji Fujikawa, a closer for the Hanshin Tigers, earlier this month in a two-year, $9.5 million deal.

According to the agents, he was expecting to take the mound as early as late August or early September after recovering from surgery.

Lim said he will leave for the Cubs’ rehab center in Arizona at the end of the month.